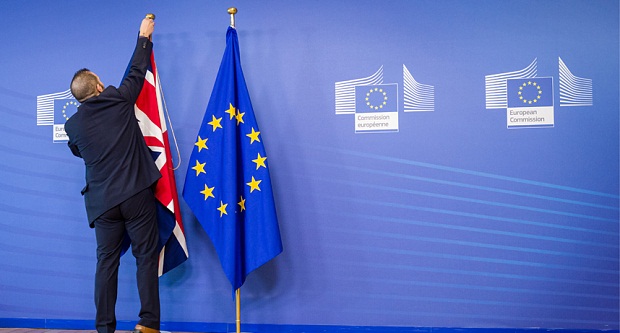 Britons have voted to leave the EU in a historic referendum, a result that has sent shockwave across Europe

Compiled by Sana Jamal (for IRIA)

The United Kingdom as a whole has voted to leave European Union, by a margin of 52% to 48%, compelling UK Prime Minister David Cameron to announce he would step down by October.

The historic decision by Britons has sent shockwaves across Europe and sparked turmoil on global markets.

Leaders of countries within the European Union have spoken of their shock and devastation at the momentous Brexit decision.

“In a free and democratic process, the British people have expressed their wish to leave the European Union. We regret this decision but respect it.”

Donald Tusk, the president of the European Union Council, says that leaders will meet without Britain at a summit next week. “We are determined to keep our unity as 27 … I will propose that we start a period of wider reflection on the future of our union,” he said, adding: “What doesn’t kill you, makes you stronger.”

“The nightmare scenario came true,” said Gianni Pittella, leader of the European Parliament’s Socialist and Democrats group. Pittella said: “It is sad but it is not the funeral of the European Union.”

Shocked European leaders vowed to remain united despite Britain’s departure as fears grew that a “chain reaction” of further referendums could tear the bloc apart.

European Parliament President Martin Schulz said he was speaking to Germany Chancellor Angela Merkel to avoid a “chain reaction” of eurosceptic success across Europe. “The chain reaction that the eurosceptics are celebrating everywhere will absolutely not happen,” he told Germany’s ZDF television. Supporters of the ‘Stronger In’ Campaign react as results of the EU referendum are announced at the Royal Festival Hall in London on June 24, 2016. ─ AFP

Stunned European nations said they were saddened by the news, as they struggle to work out on future policies, with meetings planned in several EU capitals.

French President Francois Hollande said the outcome was a “sad choice” which puts the EU in difficulty, adding that he will do everything to secure “deep change” to the Union.

Hollande held an emergency ministerial meeting on Friday morning to discuss the impact the Brexit vote from the UK on Thursday. He added that the vote was “a painful choice that he already regrets”, and that France would continue to work with the UK, which he called a “great ally”, “The British vote poses a grave test for Europe, which must show solidity and strength in its response to the economic and financial risks,” Hollande said.

Germany says Brexit vote is a ‘sad day for Europe’

German Chancellor Angela Merkel said she had “great regret” at the decision, but added the EU is “strong enough” to “find the right answers” following the vote. Germany’s Foreign Ministry described a “sad day for Europe”, adding that the news from Britain was “very sobering:”

Manfred Weber, a senior German conservative MEP and close ally of Angela Merkel, warned that Britain will receive “no special treatment” and must leave the EU within two years. “We respect and regret the decision of the British voters. It causes major damage to both sides. This was a British vote, not a European vote. Co-operation within Europe is a question of self-assertion of the continent. Sweden says Brexit is “a wake-up call for Europe”

Stefan Lofven, Prime Minister of Sweden said: “The debate and campaigning in the run-up to the referendum should serve as a wake-up call for Europe. They elicited stark polarisation and disturbing nationalism. This shows that EU cooperation must be developed and improved.”

Carl Bildt, the former Swedish prime minister, called the result “beyond comprehension” and predicted long-term turmoil as a result. Annie Lööv, the leader of Sweden’s Centre Party, called the vote “a day of mourning. A nightmare”.

Austria calls it a “political earthquake”

Austrian politicians have reacted to the news of Britain’s exit from the European Union with shock, describing the result as “a political earthquake”. Chancellor Christian Kern described said: “This is a bad day for Great Britain, a bad day for Europe, and also a bad day for our country.”

Austria’s Foreign Minister Sebastian Kurz, called Brexit “a political earthquake,” adding that it could set off a domino effect with other countries who will also consider exiting. There must be “much change and the speed has to be quick,” he added.

Netherlands shocked by Brexit, but some call for Nexit

“It is a major blow, an earthquake,’ said Dutch parliamentarian Anne Mulder. ‘It will have major consequences for the European economy and the geopolitical balance.” One study estimated an economic hit of €10bn by 2030.

It is a mighty blow for Brussels and politicians working towards the creation of a European super state,’ said party leader Emile Roemer on Twitter. ‘The EU needs an overhaul. Less Brussels, more democracy.’

Dutch far-right politician Geert Wilders – the leader of the anti-Islam, anti-immigration Freedom Party – was among the first to congratulate Britain on its “Independence Day”. “The Netherlands will be next,” he said. “We want to regain control over our country, our own money, our own borders, our own immigration policy.”

Hurrah for the British! Now it is our turn. Time for a Dutch referendum! #ByeByeEUhttps://t.co/kXZ0aQtgmx — Geert Wilders (@geertwilderspvv) June 24, 2016

Britain’s vote to leave the European Union has very significant implications for Ireland, the Irish government said ahead of an emergency cabinet meeting on Friday. Britain is by far the largest trading partner for Ireland and any loss of access to the UK market would be devastating for the country’s economy. This is not the outcome the Republic of Ireland wanted. The Irish government, which remained neutral in the Scottish independence referendum, actively encouraged Irish citizens in the UK to vote to remain in the EU.

Denmark is disappointed with results

Danish Prime Minister Lars Løkke Rasmussen said that he was disappointed in the United Kingdom’s decision to leave the EU. “We must respect the choice that a majority of the British people have made. At the same time, I won’t hide the fact that I think it is a very sad result for Europe and for Denmark,” Danish Prime Minister said.

I respect (but regret) your decision, @David_Cameron. Thank you for the cooperation through the years. #dkpol — Lars Løkke Rasmussen (@larsloekke) June 24, 2016

Rasmussen said that he hoped the UK would still choose some sort of “tight relationship” with the EU but that Denmark’s relationship with the union would not be affected by Brexit.

Brexit “should be a warning for the leaders of the EU and national leaders of the European countries, that giving young people hope for the future by ensuring job creation is among the most important things we do,” Norwegian Prime Minister Erna Solberg said.

“The British voters have spoken and that’s the way it is,” said Erna Solberg. “I think this will create a more introverted Europe, which will be concerned with finding solutions to organisational problems, instead of providing solutions to the issues voters really want addressed.

Italian Prime Minister Matteo Renzi said Friday the European Union is like a house in need of renovation, adding his voice to calls for change in the wake of Britain’s vote to leave. Admitting it was “not an easy day”, Renzi said Europe’s history had demonstrated its ability to overcome challenges. “The world has great need of the European Union” he said.

A British Second World War veteran living in Italy has said the UK vote to leave the EU will have disastrous effects on the country and on Britons living in Europe. “I think it’s a disaster for Great Britain. It will have a very bad effect on Britons in the EU and it could have been avoided.”

Jaroslaw Kaczynski, former Prime Minister of Poland, says that Britain’s decision to leave the European Union makes it evident that the bloc needs a new treaty that would regulate its operations better. “The conclusion is: we need a new European treaty,” Kaczynski said.

Poland’s foreign minister said the British vote “is bad news for Europe and bad news for Poland.” Britain leaving the EU will cast a huge cloud of uncertainty over the status of hundreds of thousands of Poles working in the UK.

Dmitry Peskov, spokesperson for the Russian president said: “Moscow wants the EU to remain a major economic power which is prosperous, stable and predictable.”

“We have a pretty heavy burden of uneasy ties with Great Britain. We hope that in the new realities, an understanding of the need for good relations with our country will prevail.”

“The UK will remain a strong and committed NATO ally, and will continue to play its leading role in our alliance” said Jens Stoltenberg, NATO Secretary General.

“A strong, united and determined NATO remains an essential pillar of stability in a turbulent world, and a key contributor to international peace and security .. The alliance remains committed to closer cooperation with the European Union.”

UK remains a strong Ally. #NATO more important than ever for cooperation among Europeans and with North America. https://t.co/oTkQvhIG0f