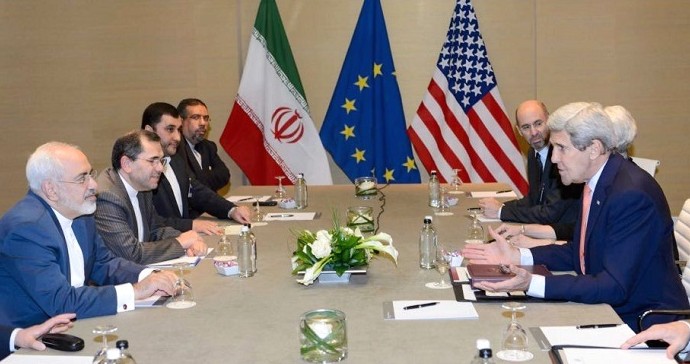 The United States, Britain, France, Germany, Russia and China have agreed on a way to restore sanctions if Iran broke its commitment on a future nuclear deal, officials say

The six world powers – the United States, Britain, France, Germany, Russia and China – have reportedly agreed on a way to restore U.N. sanctions on Iran if the country violates the terms of a future nuclear deal, clearing a major obstacle to an accord ahead of a June 30 deadline.

The new understanding on a U.N. sanctions “snapback” among the six powers brings them closer to a possible deal with Iran, though other obstacles remain, including ensuring United Nations access to Iranian military sites.

The International Atomic Energy Agency (IAEA) would also continue regularly reporting on Iran’s nuclear program, which would provide the six powers and the Security Council with information on Tehran’s activities to enable them to assess compliance.

If Iran was found to be in non-compliance with the terms of the deal, then U.N. sanctions would be restored.

U.S. and European negotiators want any easing of U.N. sanctions to be automatically reversible if Tehran violates a deal. Russia and China traditionally reject such automatic measures as undermining their veto power as permanent members of the U.N. Security Council.

The officials did not explained how sanctions would be restored but Western powers have been adamant that it should take place without a Security Council vote, based on provisions to be included in a new U.N. Security Council resolution to be adopted after a deal is struck.

“We pretty much have a solid agreement between the six on the snapback mechanism, Russians and Chinese included,” a Western official said. “But now the Iranians need to agree.”

Another senior Western official echoed his remarks, describing the agreement as “tentative” because it would depend on Iranian acceptance.

The six powers and Iran struck an interim agreement on April 2 ahead of a possible final deal that would aim to block an Iranian path to a nuclear bomb in exchange for lifting sanctions. But the timing of sanctions relief, access and verification of compliance and a mechanism for restoring sanctions if Iran broke its commitments were among the most difficult topics left for further negotiations.

The officials said, suspected breaches by Iran would be taken up by a dispute-resolution panel, likely including the six powers and Iran, which would assess the allegations and come up with a non-binding opinion, as part of the new agreement on sanctions snapback.

It was unclear exactly how the snapback mechanism would function, and how the proposal would protect the United States and other permanent Council members from a possible Chinese or Russian veto on sanctions restoration.

U.S. Ambassador to the United Nations Samantha Power has made it clear that Washington does not want Russia’s and China’s recent slew of vetoes on resolutions related to Syria to be repeated with an Iran nuclear agreement.

France’s Ambassador to the United States Gerard Araud said in Washington last week that, under a French idea, sanctions would be reinstated automatically in the event of non-compliance, avoiding the threat of a veto.

The Iranian diplomat confirmed that discussions of specific snapback options were underway. He told news media that Tehran was preparing its own “snapback” in the event the Western powers fail to live up to their commitments under the agreement.

“At least three or four different suggestions have been put on the table, which are being reviewed,” he said. “Iran also can immediately resume its activities if the other parties involved do not fulfill their obligations under the deal.” He added that it was “a very sensitive issue.”

If Iran accepts the proposed snapback mechanism, there are other hurdles that must be overcome, including IAEA access to Iranian military sites and nuclear scientists and the pace of sanctions relief.

Iran says its nuclear program is entirely peaceful and rejects allegations from Western countries and their allies that it wants the capability to produce atomic weapons. It says all sanctions are illegal and works hard to circumvent them.

US, Iran fail to make breakthrough in nuclear talks in Geneva meeting

U.S. Secretary of State John Kerry met with Iranian Foreign Minister Mohammad Javad Zarif in Geneva on Saturday. They discussed progress and obstacles to an agreement in the Iran nuclear talks a month before the deadline for a deal aimed at reducing the risk of another war in the Middle East.

Tehran rejected a key Western demand for site inspections Saturday and differences remained after US Secretary of State John Kerry and his Iranian counterpart held talks to secure a nuclear deal.

With a deadline a month away, a senior Iranian negotiator said the Geneva talks between Kerry and Iran’s Foreign Minister Mohammad Javad Zarif failed to bridge the differences between Tehran and world powers.

“The differences are still there,” Abbas Araghchi, deputy head of Iran’s negotiating team, said at the end of the meeting. Araghchi, quoted by state television’s website, said the negotiations would “resume next week at the level of deputies and experts”, rather than have the Kerry-Zarif talks go into a second day as expected.

Kerry and Zarif huddled for six hours in a leading hotel with their delegations and top European Union official Helga Schmid.

“Secretary Kerry and Foreign Minister Zarif, along with their teams, had a thorough and comprehensive discussion of all of the issues today,” a senior State Department official said.

Back in #Geneva as part of ongoing #IranTalks negotiations. Another chance to speak directly w FM @JZarif. pic.twitter.com/Ati4PkL1VS

“We are committed to working to close the remaining gaps and to staying on the schedule we’ve set forth to get this done,” the official said.

But just before the Geneva talks got underway, Araghchi said it would be “out of the question” for UN inspectors to question Iranian scientists and inspect military site inpections as part of a final deal with world powers.