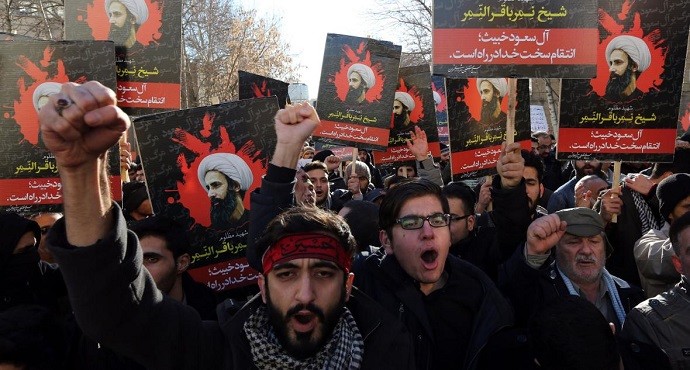 Bahrain and Sudan, both close allies of Saudi Arabia, have joined the kingdom and cut diplomatic relations with Iran, while the United Arab Emirates, another Saudi ally, has downgraded them.

In a statement, Bahrain said it was cutting relations with Iran “after the criminal cowardly attacks on the Embassy of the Kingdom of Saudi Arabia in Tehran and its consulate in the city of Mashhad.”

Sudan’s Foreign Ministry said Khartoum was cutting relations with Tehran in “response to the barbaric attacks on the Saudi Arabian embassy in Tehran and its consulate in Mashhad.” A statement from the Ministry of Foreign Affairs said the Emirates were downgrading ties with Tehran “in the light of Iran’s continuous interference in the internal affairs of Gulf and Arab states, which has reached unprecedented levels.”

The Saudi government announced on Sunday that it had broken off diplomatic ties with Iran as tensions escalate between the two long-time regional rivals amid concern what it could mean for the fight against ISIS.

Saudi Arabia has given Iranian diplomats 48 hours to leave the country, amid a row over the Saudi execution of a top Shia Muslim cleric.

Saudi Foreign Minister Adel al-Jubeir told a news conference in Riyadh that the envoys of Iran had been asked to quit Saudi Arabia within 48 hours. The kingdom, he said, would not allow the Islamic republic to undermine its security.

The decision of Saudi Arabia came shortly after Iran’s top leader harshly criticized the execution of Shiite cleric Sheikh Nimr al-Nimr. The Saudi Foreign Ministry said its diplomatic staff was already being evacuated from Iran. The move was surprising because after protesters stormed the Saudi Embassy in Tehran, the Iranian government appeared to be trying to quell tensions.

Tension escalated between Saudi Arabia and Iran over Riyadh’s execution of a prominent cleric. The cleric, Sheikh Nimr al-Nimr, was among 47 men executed in Saudi Arabia on terrorism-related charges, drawing condemnation from Iran and its allies in the region, and sparking fears that sectarian tensions could rise across the Middle East.

Western governments quickly became concerned the abrupt escalation of tensions foreshadow “a new year of growing hostilities in the regional battle for influence between the Sunni kingdom of Saudi Arabia and Iran, the dominant Shiite power in the Middle East,” notes the Wall Street Journal. The severing of diplomatic ties comes at a particularly bad time considering that the United States and other Western countries were “hoping that even limited cooperation between the two powers could help end the crushing civil wars in Syria and Yemen and ease tensions in Iraq, Bahrain, Lebanon and elsewhere,” points out the New York Times.

Although the U.S. State Department publicly called for calm, White House officials were privately critical of Saudi Arabia for moving forward with the execution that they knew would spark regional upheaval. “This is a dangerous game they are playing,” a U.S. official tells the Washington Post. “There are larger repercussions than just the reaction to these executions,” the official added, noting the fight against ISIS as an example. The State Department had reportedly been warning Riyadh for months about the potential for regional strife if it went ahead with the executions.