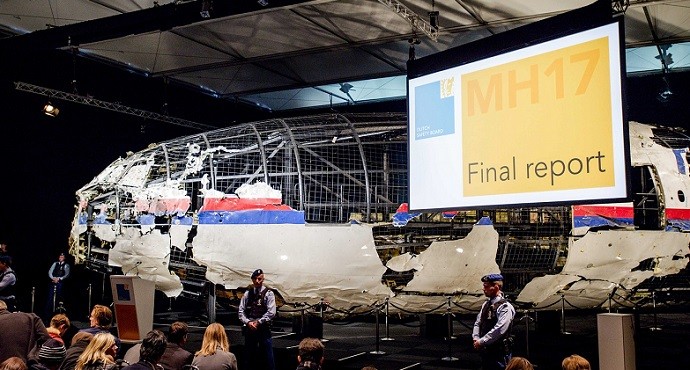 Malaysia Airlines flight MH17 was downed by a Russian-made “warhead” fired from eastern Ukraine that detonated outside the jet’s cockpit, Dutch investigators concluded in their final report Tuesday.

The findings of the Dutch Safety Board — which did not assign blame for the deadly crash — were announced at a press conference against the dramatic backdrop of the Boeing 777’s partially reconstructed fuselage.

Tjibbe Joustra, chairman of the Dutch Safety Board, said that the crash was caused by “the detonation of a warhead” to the left of the cockpit.

State Department spokesman Mark Toner said the report validated Secretary of State John Kerry’s statement more than a year ago that the plane was shot down by a surface-to-air missile launched from territory controlled by Russian-backed separatists, Separatist leaders bragged “about shooting down an aircraft in the immediate aftermath of this tragic event,” Toner  said.

The Dutch Safety Board’s report also criticized Ukraine authorities — as well as airlines and other countries — for not recognizing the risks in flying over the conflict zone in the east of the country.

Though the report did not assign blame but it is almost certain to further strain diplomatic ties between the western countries and Russia.

The Dutch investigators’ findings were released just hours after the company which manufacture the BUK missile system released its own report.

In a rival press conference in Moscow, Almaz-Antey claimed it had conducted its own tests that contradicted the Dutch report. The company said it detonated a BUK missile near the nose of an aircraft similar to a Boeing 777 but that the damage patterns were different to those seen in MH17. “It is known that the Malaysian jet was peppered with diamond rather than butterfly-shaped holes,” the company said in a press release.

Although investigators confirmed a Russian Buk missile shot down Malaysia Airlines Flight 17 over Ukraine, but what the investigation failed to uncover is who shot the missile and why, argues Bart Jansen in USA TODAY.