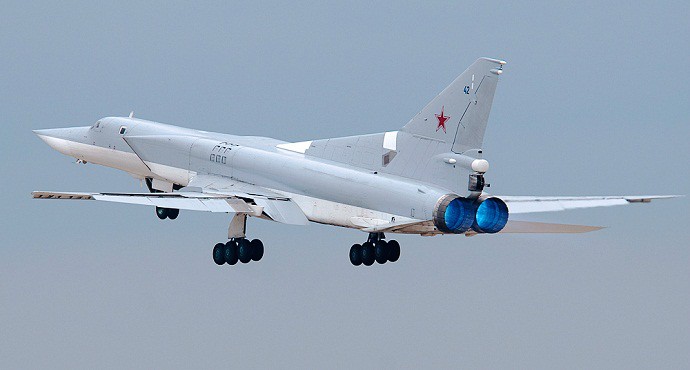 MOSCOW — Russia has launched a second round of airstrikes in Syria from a base in Iran to bomb the ISIS (Daesh) group in Syria, killing more than 150 militants, Russian military said on Wednesday.

This is the first time the Islamic republic of Iran has allowed a foreign power to conduct military operations from its territory since the 1979 revolution.

“On August 16, Tu-22M3 long-range bombers and Su-34 frontline bombers, flying with a full bomb load from the Hamedan air base, conducted a group air strike against targets” of Daesh and Jabhat Fath al-Sham terrorists in the Syrian provinces of Aleppo, Dayr al-Zawr and Idlib, the Russian ministry said.

On Wednesday, Russian Sukhoi-34 jets took off from the Hamedan airbase in western Iran and carried out a group aerial strike against IS targets in Deir Ezzor province, the defense ministry said in a statement, calling the operation a success.

The strikes with high-explosive fragmentation bombs “destroyed two command centers and large field camps for training terrorists in the area of the town of Deir Ezzor, killing more than 150 fighters including foreign mercenaries,” according to the Russian ministry.

US State Department official said that Russia’s use of an Iranian air base to carry out military strikes in Syria is “unfortunate but not surprising,”, adding Washington is still assessing the extent of Russian-Iranian cooperation.

Iran and Russia are Syrian government’s main allies and have been assisting it in Damascus in its fight against foreign-backed terrorist groups, including the Daesh terrorists.

“Tehran-Moscow cooperation in the fight against terrorism in Syria is strategic and we exchange capacities and potentialities in this field,” Secretary of Iran’s Supreme National Security Council (SNSC) Ali Shamkhani told IRNA.

How will the move benefit Russia’s Syria campaign?

Russia has been conducting long-range bombing missions in Syria against forces opposed to President Bashar al-Assad since the beginning of its intervention in September 2015.

Flying from Russian territory, the majority of Moscow’s heavy bomber sorties have been undertaken by the Tu-22M3 Backfire aircraft. Alongside the powerful Su-34 Fullback, the Tu-22M3s are now conducting operations against targets in Syria from Iran’s Hamedan airbase.

The newly signed military agreement with Iran will allow Russia to reduce flight time by 60%, saving the Kremlin both money and improving airstrike effectiveness, pointed out this report.

Currently, the strategic TU-22M3 bombers take flight from southern Russia at Modzok airfield. The distance of these flights equal roughly 2,150km to reach a target near Palmyra. Whereas the Hamedan Air Base in Iran is roughly 900km from Palmyra.

Russia was granted access to Khmeimim airbase in Latakia province in 2015 but the airbase is not suitable for the massive TU-22M3, one of the largest bomber jets in the world. Russian Tu-22M3 bomber stands on the tarmac while another plane lands at an air base near Hamedan, Iran. Photo taken on Monday, Aug. 15, 2016