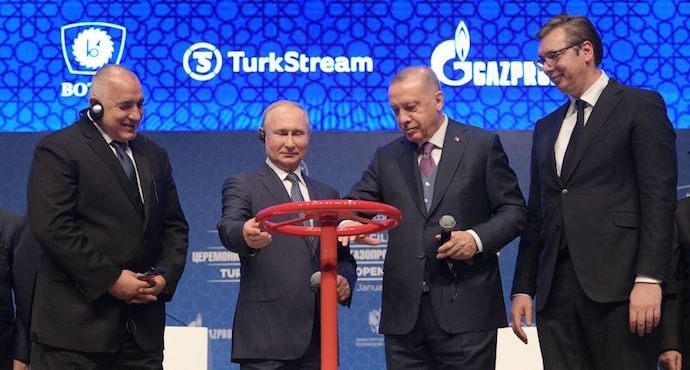 The leaders of Turkey and Russia formally launched the TurkStream pipeline which will carry Russian natural gas to southern Europe through Turkey. The project was launched in Istanbul amidst rising tensions in the Middle East between the United States and Iran.

Speaking at the inauguration ceremony, Turkish President termed the project “historic” in terms of bilateral ties and cooperation in the energy field.

TurkStream is the southern counterpart of another new Russian pipeline, called Nord Stream 2, across the Baltic Sea to Germany.

Last month, the U.S. imposed sanctions on both TurkStream and Nord Stream 2 to counter “Russian aggression” in Europe.

Turkish and Russian presidents called for a ceasefire in Libya in a joint statement issued following an Istanbul meeting.

On the tension between Iran and the U.S., the two leaders said: “We are deeply concerned about the escalation of tension between the U.S. and Iran.” They issued a joint call for restraint by Washington and Tehran