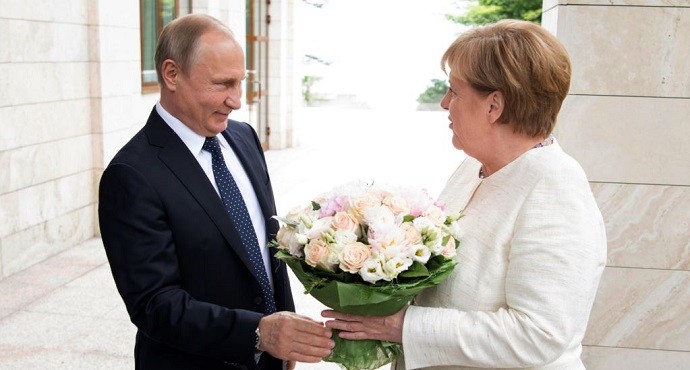 Germany’s Angela Merkel has met Russian President Vladimir Putin on Friday in Sochi where the two long-ruling leaders tackled an array of disputes between the two countries.

Russian President Vladimir Putin and Prime Minister Dmitry Medvedev have held a brief conversation in Russian with German Chancellor Angela Merkel while welcoming the German delegation that had arrived for talks to Putin’s Sochi residence.

Mr Putin held wide-ranging talks with German Chancellor over the Ukraine conflict, Europe’s response to the U.S. withdrawal from the Iran nuclear deal, and the construction of a pipeline bringing gas from Russia to Germany.

Putin said Russian natural gas may still flow to neighboring Ukraine even after the completion of the Nord Stream 2 pipeline project, which will carry Russian gas to Germany, bypassing Ukraine.

“A suspension of the transit of Russia gas through Ukraine is not assumed,” Putin said after talks with Merkel in the Black Sea resort of Sochi on May 18. “Supplies will continue if they are economically viable.”

Merkel said that “Germany believes Ukraine’s role as a transit country should continue after the construction of Nord Stream 2… it has a strategic importance.” She added that Germany was ready to help ensure such an outcome.

Both leaders said the Minsk accord was the “only basis” to achieve peace in eastern Ukraine, and that work should continue in the so-called “Normandy” format — involving Germany, France, Russia and Ukraine.

Putin said that European countries should help Syria rebuild if they want refugees to return to the country.

Merkel, who earlier in the day received a bouquet of pink and white roses from Putin as she arrived at his residence in Sochi, also hinted at tensions between Berlin and the Trump administration.

Putin greets Merkel with a white rose bouquet upon her arrival in Sochi pic.twitter.com/c1CtRNvhJE