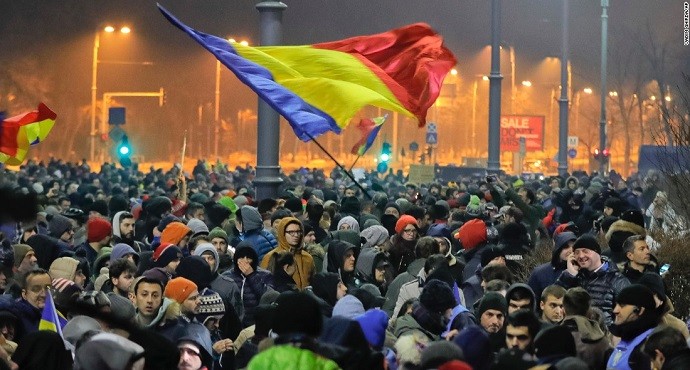 Romanians rallied across the country in huge numbers, demanding the resignation of government officials in the biggest street protests in Romania since communism ended in 1989.

The morning after 250,000 Romanians took to the streets, Romania’s trade and business minister, Florin Jianu, announced his resignation over the decree, which could effectively amnesty dozens of officials accused of corruption, saying he disagreed with the government’s stance on corruption.

Mihai Chirica, the mayor of Iasi and a deputy chairman of the Social Democrats, called on the government to scrap the decree and send it to Parliament for debate and approval.

Amid growing criticism of Romania from abroad, the country’s president said Thursday he will ask judges to declare unconstitutional an emergency government decree that dilutes what qualifies as corruption.

Romanians are protesting against the Government’s emergency ordinance that changes the Criminal Code and partially decriminalizes some corruption offenses.

The protesters have been asking the Government to revoke the emergency ordinance. However, Romanian Prime Minister Sorin Grindeanu said on Thursday that his cabinet will not do that.

“We made a decision two days ago, and we are rightfully going ahead with it,” Grindeanu said in the first press conference with his party leader, Liviu Dragnea.

Romania, a country of 20 million people, joined the European Union in 2007, but has struggled to combat endemic corruption. The decree would, among other things, decriminalise abuse-of-power offences in which the sums involved are less than 200,000 lei ($48,000).

European Commission vice president Frank Timmermans urged the Romanian government on Thursday to “urgently reconsider” the decree, warning that if it is adopted, it could affect the EU funds that Romania gets.

In a separate statement, the U.S., Germany, Canada, Finland, the Netherlands, and France said Romania’s government had undermined “progress on rule of law and the fight against corruption over the past ten years.”