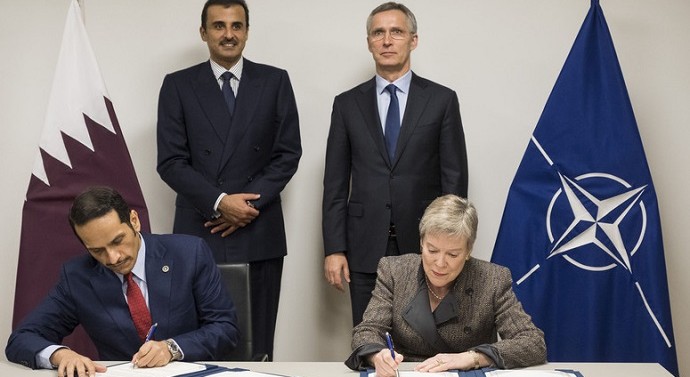 Qatar has signed defense deals with the North Atlantic Treaty Organization (NATO) and US to enhance military and security cooperation.

The deal with NATO was signed on 7 March 2018 at NATO Headquarters in Brussel where NATO Secretary General Jens Stoltenberg held a meeting with the Emir of Qatar, Sheikh Tamim Bin Hamad Al-Thani.

The two leaders discussed the security situation in the Gulf region and the partnership between NATO and Qatar, the statement said.

“This will facilitate NATO missions and operations in the region, including the Resolute Support Mission in Afghanistan,” the NATO statement said.

Qatar is one of four countries – along with Bahrain, Kuwait and the United Arab Emirates – participating in NATO’s Istanbul Cooperation Initiative (ICI). Launched in 2004, ICI seeks to promote political consultation and practical cooperation between NATO and countries in the Gulf region.

In another related development, the United States approved the potential sale of air defence systems worth $197 million to Qatar yesterday, a statement by the Defence Security Cooperation Agency confirmed.

“This proposed sale will contribute to the foreign policy and national security of the United States by helping to improve the security of a friendly country that has been, and continues to be, an important force for political stability and economic progress” in the Gulf region, the Defence Security Cooperation Agency said.

“The upgrade of the [Air Operations Centre] AOC will support the defensive capability of Qatar. The proposed sale will help strengthen Qatar’s capability to counter current and future threats in the region and reduce dependence on US forces. Qatar will have no difficulty absorbing the required equipment and capability into its armed forces,” the statement continued.

The proposed sale “will contribute to the foreign policy and national security of the United States” by helping to advance the security of a friendly country and “an important force for political stability and economic progress in the Persian Gulf region.”

The deal coincides with Qatar and NATO agreement on military and security cooperation.