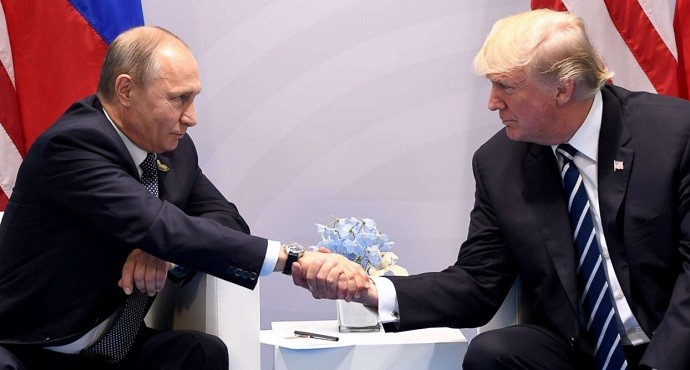 Russian President Vladimir Putin and US President Donald Trump discussed the Ukraine and Syria crises, the fight against terrorism and cybercrimes along with cyber security during their meeting in Hamburg, Germany.

Speaking on the sidelines of the G20 meeting that lasted two hours and 16 minutes,  Mr. Trump expressed his doubts about the extent of Russian meddling. As he has repeated in the past, Putin denied involvement in meddling in the election.

Trump and Putin both agreed, however, that the issue of election meddling was a substantial hindrance in their ability to move the U.S.-Russia relationship forward.

“President Putin and I have been discussing various things and I think it’s going very well. We’ve had some very, very good talks,” Trump told reporters before the meeting. “We’re going to have a talk now and obviously that will continue, but we look forward to a lot of very positive things happening — for Russia, for the United States, and for everybody concerned. And it’s an honor to be with you.”

U.S. Secretary of State Rex Tillerson told reporters that Trump and Putin had a “robust and lengthy exchange on the subject.”

The larger gathering of the G-20 leading economies will focus on high-profile issues like climate change, global trade, North Korea, Syria and Ukraine.

Putin and Trump agree on ceasefire in Syria

Russia and the United States have agreed on a ceasefire in the south of Syria from 12.00 Damascus time on July 9, Russian Foreign Minister Sergei Lavrov said after the talks of Russian and US presidents, Vladimir Putin and Donald Trump.

“That was a very lengthy, very specific conversation,” Russia’s top diplomat said. “My impression is that both presidents, the Russian and the American, are guided by the two countries’ interests.”

“We with [US Secretary of State] Rex Tillerson have been instructed to continue and expand cooperation between our ministries, both directly and at the United Nations Security Council, on the entire spectrum of the international agenda, including the Korean Peninsula,” he said.