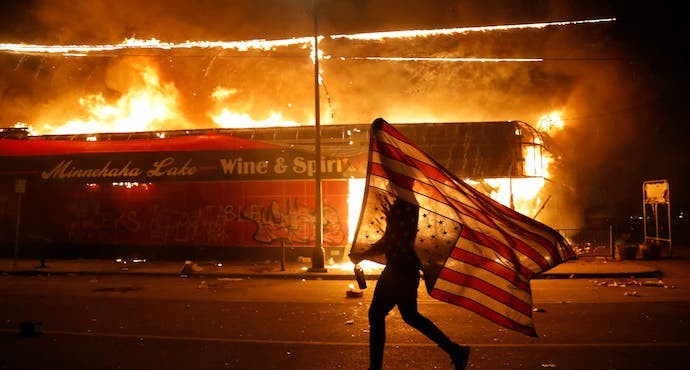 Tens of thousands of people took to the streets for a fifth night to protest the death of George Floyd and other African Americans at the hands of the police.

Nationwide protests erupted in the United States over police violence after the death of handcuffed African American man, George Floyd, by a white police officer in Minneapolis.

The protests continue even after the officer was arrested and charged with third-degree murder and manslaughter.

Curfews had been enacted in at least 25 cities, including Philadelphia, Los Angeles and Minneapolis. In New York, at least two police vehicles were set on fire, according to CBS. Protesters also gathered outside the White House, where fires and fireworks were lighted to disperse the crowd.

Protests started out peacefully but as the night proceeded, violence erupted from both protestors and police. People set fire to police cars, threw bottles at police officers and busted windows of storefronts.

Police have arrested nearly 1,669 people in 22 U.S. cities, according to AP. Officials said three people in Indianapolis were shot Saturday night, including one fatally, adding to deaths in Detroit and Minneapolis in recent days, AP said.

Reacting to the protests, U.S. President Donald Trump tweeted that “when the looting starts, the shooting starts” – a remark which some of his aides warn could further inflame the violent situation.

Police precinct set on fire on the third day of demonstrations as the so-called Twin Cities of Minneapolis and St. Paul seethed over the shocking police killing of a handcuffed black man