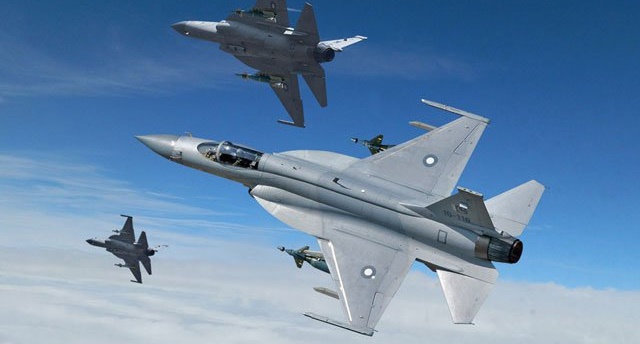 Pakistan’s government has provided a $184.3 million sovereign guarantee for the sale of three JF-17 fighters to Nigeria.

Pakistani government’s Economic Coordination Committee (ECC) has approved sovereign guarantee certificate over the sale of three JF-17 jets to Nigeria for a sum of $184.3 million, a local media reports.

Nigeria and Pakistan had recently signed an agreement over the sale of JF-17’s for the Nigerian Air force.

Country’s Ministry of Defence Production informed the economic decision-making committee that the PAC Kamra had signed a contract for the sale of three JF-17 aircraft and associated package to Nigerian Air Force.

JF-17 “Thunder” multirole fighter is a single engine, lightweight, multipurpose combat aircraft that was developed jointly by Chengdu Aircraft Industry Corporation (CAC) of China and Pakistan Aeronautical Complex (PAC) of Pakistan. It has a combat radius of up to 1,200 kilometers without refueling and can reach a maximum speed of up to Mach 1.6.

The medium-sized aircraft is built mainly to meet the needs of the Pakistan Air Force (PAF) and will replace its current aging fleet of Nanchang A-5, Chengdu F-7P / PG and Dassault Mirage III / V fighter aircraft.

The aircraft is capable of carrying a weapons payload of over 3.5 tons and can be armed with a variety of air-to-air, air-to-surface, and anti-ship missiles.