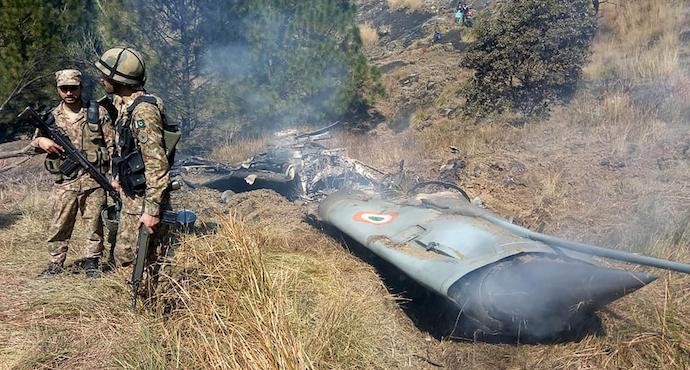 Pakistan military claims that they shot down two Indian aircraft and captured a pilot.

The confrontation came a day after India said it launched airstrikes in Pakistan territory in the first such intrusion by Indian air force since the India-Pakistan war of 1971.

Pakistan Army said that Indian Air Force (IAF) crossed the Line of Control (LoC) and two of their aircraft were shot down by PAF inside Pakistani airspace of which one fell inside Azad Jammu and Kashmir while other aircraft fell inside Indian side of Kashmir.

However, Pakistan Army spokesperson Maj Gen Asif Ghafoor asserted that “Pakistan’s response is actually not a retaliation. It is the demonstration of our capability, capacity and will” of a “responsible state.”

One Indian pilot is also in custody of Pakistan. Pakistan later released a video of the detained Indian pilot, identifying him as Wing Commander Abhinandan. Maj Gen Ghafoor said the captured Indian pilot was being “treated as per norms of military ethics”.

Pakistani Prime Minister Imran Khan called for talks with India and hoped “better sense” would prevail so that both sides could de-escalate.”History tells us that wars are full of miscalculation. My question is that given the weapons we have can we afford miscalculation,” Khan said during a brief televised broadcast to the nation. “We should sit down and talk.”

Pakistan Foreign Office in its statement said “[The] sole purpose was to demonstrate our right, will and capability for self-defence. We have no intention of escalation but are fully prepared to do so if forced into that paradigm.”

India’s foreign ministry spokesperson has confirmed that one of their pilots is missing and that they are “ascertaining the facts”.