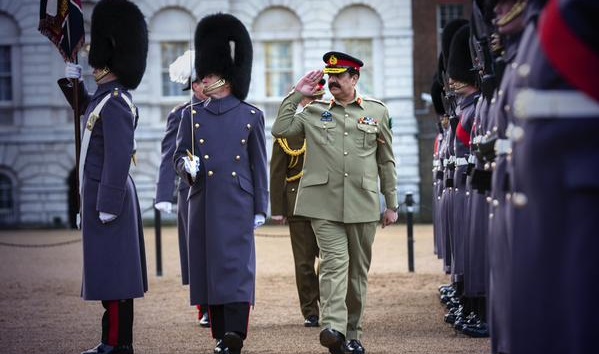 In a series of tweets, ISPR spokesman Asim Bajwa said the COAS raised issue of action against proscribed organisations, anti-Pakistan elements operating from outside Pakistan and measures to choke terror financing. He was presented full guard of honour and was as accompanied by Chief of the Defence Staff UK, Gen Sir Nicholas Houghton.

The COAS was expected to brief British leaders on Pakistan’s war against terror and the ongoing Operation Zarb-i-Azb.

Pakistan’s military in mid-June had launched an all-out operation, named ‘Zarb-i-Azb’, against Taliban militants in the region which is still under way.

Moreover, months into Zarb-i-Azb, the army also launched Khyber 1, an operation to clear out militant strongholds in the tribal region of Khyber.