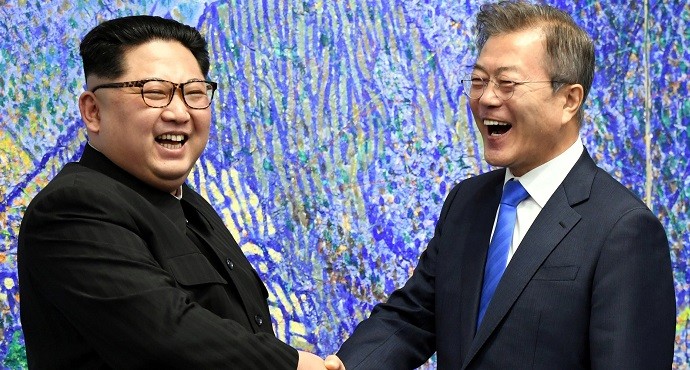 In a historic summit, South Korean President Moon Jae-in and his North Korean counterpart, Kim Jong Un committed themselves to the complete denuclearization of the Korean Peninsula and pledged to bring a formal end to the Korean War, 65 years after hostilities ceased.

Shaking hands with Moon Jae-in, while standing in the demilitarized zone (DMZ) dividing the two countries, Kim told the South Korean President he felt the weight of meeting at “such a historic location.”

“It was a very courageous decision for you to come all the way here,” Moon replied.

They signed the Panmunjom Declaration for Peace, Prosperity and Unification on the Korean Peninsula, which commits the two countries to denuclearization and talks to bring a formal end to the conflict.

Wrapping up the day, Kim made a toast and said: “Today’s meeting and accomplishment is just the beginning and nothing more than a tip of the iceberg compared to what we have to do ahead,” he said.

“Let’s end the history of confrontations and mistrust between the North and the South, hold hands together and boldly move forward for the future of our people.”

In an exceptional day-long summit marked with symbolism, the two leaders embraced, planted tree and talked alone for more than 30 minutes.

Kim Jong Un joked at a summit with South Korean President Moon Jae-in on Friday that he would no longer interrupt Moon’s sleep with missile tests.

Kim was presented with flowers by two South Korean fith-grade students and posed for photos with them and the South Korean leader.

The two leaders also inspected a traditional Korean guard of honor before greeting ministers and military officers of both countries and making their way to Peace House, the summit venue.

The United Nations Secretary General applauded the historic Korea summit and noted that many around the world are “moved by the powerful imagery,” according to a statement from his spokesman.