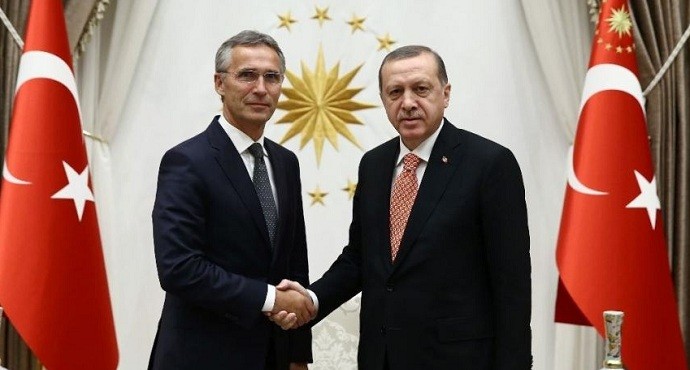 European officials visit Turkey for the first time since the attempted coup to reassure their ally that they would continue their partnership. NATO welcomes Turkey’s increased fight against Islamic State

Marking his first visit to Ankara to show solidarity with Turkey since the attempted coup in July 2016, NATO Secretary General Jens Stoltenberg supported Turkey’s efforts against Daesh and that Ankara is entitled to defend itself.

“We welcome Turkey’s increasing efforts to fight against Daesh. Turkey has a right to defend itself. There have been many terrorist attacks coming from the Syrian side,” Stoltenberg told broadcaster NTV. He stated that “We must train local forces in Syria to fight terrorism and ensure stability in the county.”

NATO Secretary General visited Ankara from 8-9 September 2016 and met Turkish President Recep Tayyip Erdoğan to discuss Turkey’s contributions to the Alliance’s shared security – including in Afghanistan, in the fight against ISIS, and in NATO’s efforts to stop human trafficking in the Aegean Sea.

NATO Secretary General Stoltenberg assured Turkey of the bloc’s support, saying, “Turkey is a strong and highly esteemed member of the NATO, and will continue to remain so…If the coup had been successful, it would have been catastrophic not only for Turkey, but also for the entire alliance.”

The Secretary General also reiterated NATO’s condemnation of the recent coup attempt, expressing condolences for those who lost their lives, and respect for the courage of the Turkish people. “Any attack on democracy, in any of our countries, is an attack on the very foundation of our Alliance. A strong and democratic Turkey is essential for the stability and security of Europe and the region,” he said.

During his visit, Mr Stoltenberg said:

“NATO continues to stand in solidarity with Turkey, with increased naval and air presence, and with defensive missile systems on the border with Syria.”

“Just as you stand with NATO, NATO stands with Turkey. We have increased our military presence in Turkey with more assets in the air, naval assets and also defensive missile defense systems deployed in Turkey,” Stoltenberg told journalists in Turkey.

The Incirlik airbase in Turkey hosts jets from the US, Germany, the UK, Saudi Arabia and Qatar, who are participating in the US-led coalition against Daesh.

Mogherini said Brussels would continue moving ahead with Ankara on visa-free travel and an upgraded customs union, which has become a major bargaining chip in the EU and Turkey’s negotiations for a refugee deal. Underlining the importance of Turkey’s role on the international arena, Brende also said that Turkey’s normalization process with Russia was a very constructive step for the whole region.