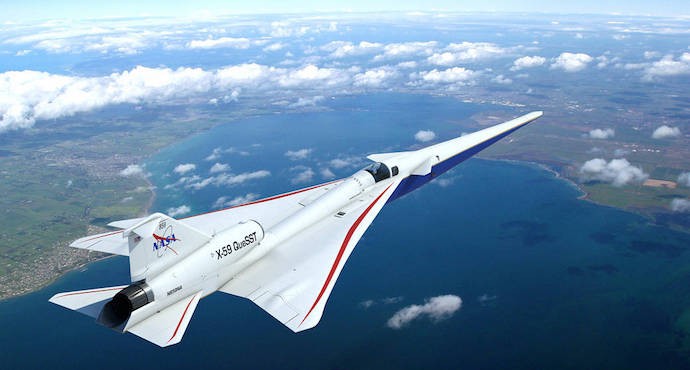 NASA’s first large scale piloted X-plane in more than three decades is cleared for final assembly and integration of its systems following a major project review at NASA Headquarters in Washington.

“With the completion of KDP-D we’ve shown the project is on schedule, it’s well planned and on track. We have everything in place to continue this historic research mission for the nation’s air-traveling public,” said Bob Pearce, NASA’s associate administrator for Aeronautics.

NASA’s X-59 QueSST (short for Quiet SuperSonic Technology) is an experimental piloted aircraft designed to fly faster than sound without producing the sonic booms. To be precise, it creates a sound about as loud as a car door closing, 75 Perceived Level decibel (PLdB), making it the first low-boom supersonic plane.

It is NASA’s first large-scale, piloted x-plane (or experimental aircraft) in more than three decades with the goal is to reduce the loudness of a sonic boom to more of a sonic thump.

The design features no front-facing cockpit window as cameras will feed the forward view to a 4K ultra-high-resolution monitor in the cockpit.

Scheduled to fly in 2021, the construction of the aircraft, under a $247.5 million cost-plus-incentive-fee contract, is continuing at Lockheed Martin Aeronautics Company’s Skunk Works factory in California.