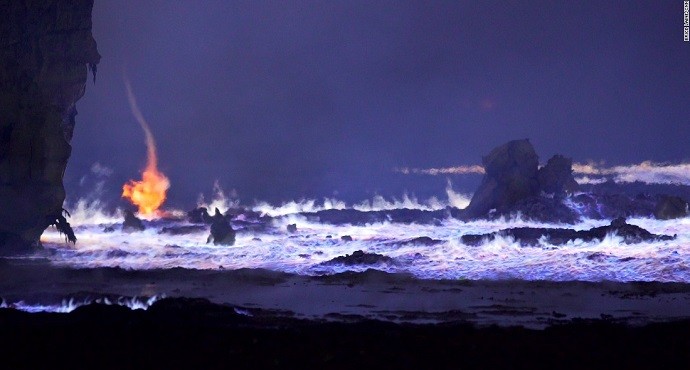 Nearly 1,000 people have been treated for breathing problems linked to toxic gases from a sulfur plant set ablaze by ISIS militants

In the Iraqi town of Qayyarah, in south Mosul, black and gray clouds cover the sky and the air is painful to breathe as retreating ISIS fighters have set fire to oil wells as well as a sulfur plant in the area which has wrapped the area in toxic black and white smoke.

At least two people have been killed and hundreds of others wounded, reported AFP citing Iraqi General Qusay Hamid Kadhem.

As many as 1,000 people were hospitalized after inhaling the toxic gas from burning sulfur, Reuters reported.

Most patients have been given oxygen and told to stay away from areas with high sulfur concentration, according to medical aide Saddam Ahmad, who was wearing a surgical. “We’ve had so many patients since yesterday that we’re almost out of oxygen,” Ahmad said.

The sulfur cloud spread over an area of about 5 sq km, has forced about 200 families to evacuate, according to an Iraqi army official. Operation Inherent Resolve, the official name of the U.S-led anti-Islamic State coalition, said in a statement on Saturday it had provided more than 24,000 protective chemical masks to the Iraqi security forces and the allied Kurdish Peshmerga fighters during training for the Mosul offensive.

The Qayyara West airfield is the main U.S. hub to support Iraqi-led operations to retake Mosul. Reports suggest that there are about 5,000 U.S. troops in Iraq but the U.S. military has not disclosed the number of personnel at the airfield.

Days after a U.S.-backed offensive to liberate Iraqi city of Mosul from ISIS began on October 17, the jihadists torched at least part of the al-Mishraq chemical factory, which is located about 18 miles southeast of the city. The fire has reportedly been extinguished now.

“The toxic cloud, which includes deadly sulphur dioxide and hydrogen sulphide, combined with residue from burning oil wells, is a potentially fatal cocktail for those caught in the open or without gas masks,” according to the Telegraph.

“When we go to sleep we’re clean, but when we wake up our faces are dark. The color of everything in our house has changed,” says Shaker Ibrahim Khalifa, 42, a butcher from Qayyarah.

“My child has a problem in his lungs,” says another man named Ahmed Najm Abdullah, a member of the Hashd al-Watani, a localized, predominantly Sunni armed force allied with the military in the fight against ISIS. “The problem in his lungs began when the sulfur started burning,” he says. His village was recently retaken from ISIS. “The situation is still unstable, so I can’t get treatment for my kids.”

“Sulphur dioxide gas is toxic when inhaled or when the skin or eyes are open,” points out Daily Mail. “It can lead to vomiting and stomach pain, while skin contact can cause stinging pains and, in severe cases, blindness.”

The burning chemical plant fueled a toxic pall that formed south of Mosul, highlighting ISIS’s ability to render Iraqi territory unlivable even as its self-proclaimed caliphate is under attack.

Iraqi forces and their allies have launched a major offensive this week to retake Mosul, the country’s second-largest city, from the Islamic State group. More than 4,000 people have fled the area, according to United Nations. Addressing some 50,000 faithful in St Peter’s Square, Pope Francis said hee was “pained by the murder in cold blood of numerous sons of this beloved land, among them many children.”

He expressed his closeness to the people of Iraq “in these dramatic hours,” saying “our souls are shaken by the brutal acts of violence that are being committed for too long against innocent citizens, whether Muslims or Christians.”

#ISIS blew up a mountain of sulfur as a parting gift to #Mosul. Amazing imagery from @arwaCNN and her team. WATCH: https://t.co/v7jKxkiDIL pic.twitter.com/2HJofMNKWf