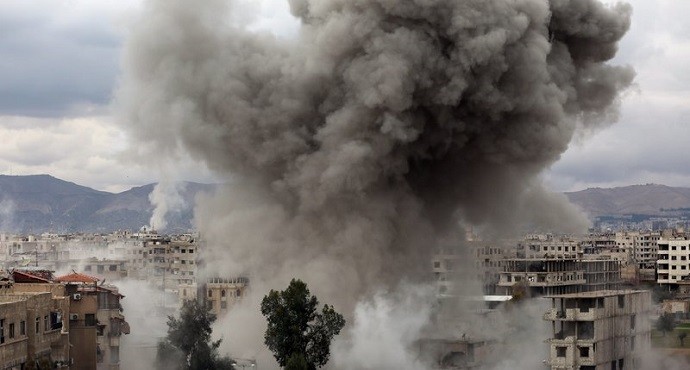 Latest bombardment on Eastern Ghouta killed dozens Thursday, bringing the number of dead civilians in a six-day assault by the Syrian government to more than 400.

Opposition activists say Syrian government warplanes carried out a sixth day of airstrikes in the rebel-held suburbs of Damascus, killing over 400 people in one of the bloodiest episodes of Syria’s seven-year conflict.

The Syrian Observatory for Human Rights said on Thursday that at least 403 people were killed in the “hysterical attack” that began on Sunday, including 150 children. Almost 2,120 others were wounded.

The number of casualties has overwhelmed rescuers and doctors at hospitals, many of which have also been bombed.

Meanwhile, at the United Nations, a vote on a Security Council resolution demanding a 30-day humanitarian cease-fire across Syria was delayed until Saturday to try to close a gap over the timing of a halt to fighting.

The new bombings came a day after Syrian army helicopters dropped leaflets over the rebel-controlled areas of eastern Ghouta, urging residents to leave the suburbs for their own safety and calling on opposition fighters to surrender.

Opposition activists reported airstrikes and artillery shelling on a string of towns on the edge of Damascus or eastern Ghouta.

At least 32 people were killed in raids on areas including Hammouriyeh, Zamalka, Douma and al-Marj, according to the Syrian Observatory for Human Rights, a Britain-based group that monitors the civil war through a network of activists in Syria, as the death toll from a week of bombing soared over 400.

Syrian state TV reported that insurgents fired 70 shells on Damascus, killing one person and wounding 60 others. It said one of the shells hit a hospital, damaging its intensive care unit as well as cars parked nearby.