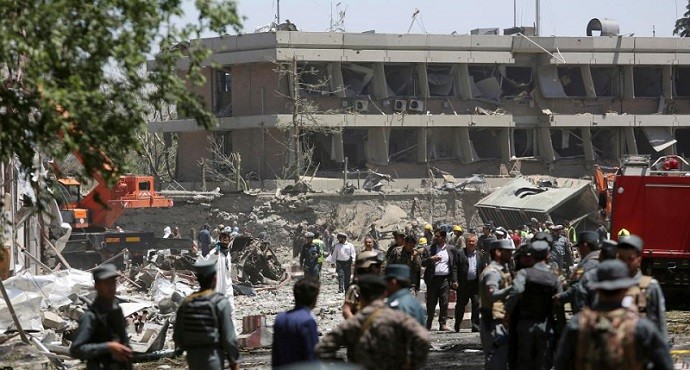 A powerful bomb exploded in the morning rush hour in the centre of Kabul on Wednesday, killing at least 80 people, in a highly secure diplomatic area of Kabul.

At least 80 people have been dead and more than 360 wounded in the explosion that sent clouds of black smoke into the sky, the Afghan public health ministry has said.

The bomb, one of the deadliest in Kabul and coming at the start of the holy month of Ramadan, exploded close to the fortified entrance to the German embassy, killing a security guard and wounding some staff, German Foreign Minister Sigmar Gabriel said on Twitter.

Residences and offices of Pakistani, Indian, French, and German diplomats, among those of other countries, were damaged.

“I felt like it was an earthquake, and after that I do not know what happened,” said Mohammed Hassan, 21, who was attending a training program at the Azizi Bank, half a block from the blast, and suffered cuts on his head and arms. “All the staff around me, everyone, was injured.” He said he was brought to the hospital by an army Ranger truck. Afghan security forces patrol the site of a deadly suicide bomb attack in Kabul, Afghanistan, on Wednesday, May 31.

Pakistan condemned the “terrorist attack in Kabul this morning that has caused loss of precious human lives and injuries to many”.

German Foreign Minister Sigmar Gabriel said that employees of the German Embassy were wounded in the attack and that one Afghan security guard was killed. “Our thoughts are with the families and friends of the victims. We wish those injured a quick recovery,” the foreign minister said. “It’s particularly despicable that these people were targeted.”

FM @sigmargabriel: Shocking news from #Kabul. I condemn the attack in the strongest terms. Our thoughts are w/ the relatives of the victims

Strongly condemn the appalling attack in #Kabul that killed many innocent. #Qatar rejects all forms of violence and terrorism.