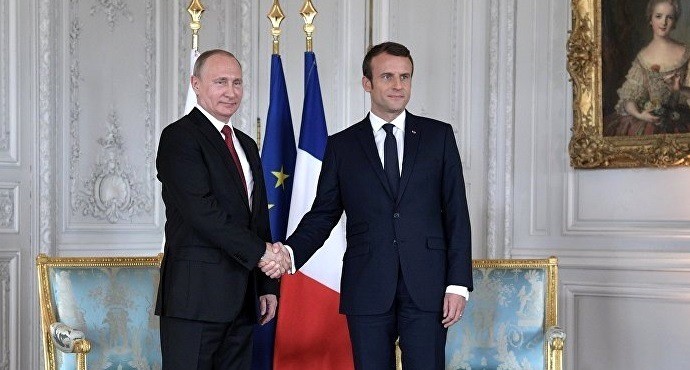 The first meeting between the two leaders was held at the Palace of Versailles, currently the host of an exhibition commemorating the 300th anniversary of Peter the Great’s diplomatic visit to Paris and surrounding areas.

Macron said he wanted to work with Russia over the conflict in Syria in the struggle against terrorism.

Meanwhile, Putin said he wanted to strengthen economic ties with France after the restrictions of recent years.

After a two-hour meeting with the Russian president, the French president said he wanted to strengthen cooperation with Russia in seeking a solution to the Syria conflict. He said this involved talking to all parties in a “diplomatic and political framework”.

But Macron said France would show “no weakness” if chemical weapons were used, and would immediately respond.

Putin also said that the two leaders have some differences, but the French-Russian relations could be “qualitatively” improved.

“We sought … common ground [in dealing] with key issues of the international agenda. And I believe that we see it. We are able to … at least try to start resolving the key contemporary problems together,” Putin said.

The two leaders Macron and his Russian counterpart also agreed on the need to restart dialogue on the situation with Ukraine.

“We spoke at length about the details of the situation” in Ukraine, said Macron after the talks, adding that both parties wanted “in the shortest timeframe a dialogue in the Normandy format, and that a full account of the situation can be shared.”

The French president also said he wanted France and Russia to cooperate in Syria in order to destroy terrorism and restore peace, calling for an “inclusive political solution that goes beyond eradicating terrorists.”

Macron who seemed to have dominated the press conference later said: “It was an exchange that was extremely frank, direct, with a lot of things that were said”.

“We have disagreements, but at least we talked about them” he added.