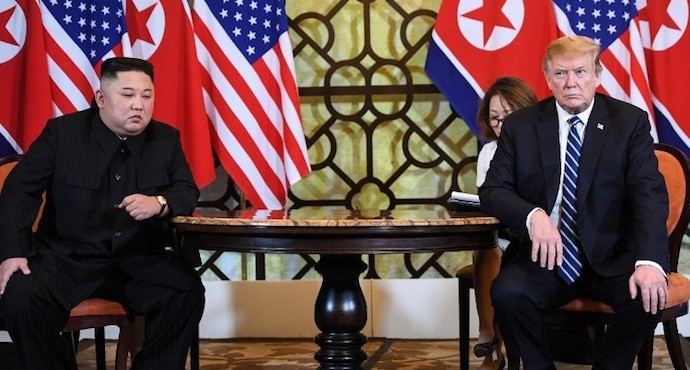 No agreement reached at Trump-Kim summit in Vietnam

The nuclear summit between US President Donald Trump and North Korean leader Kim Jong Un in Hanoi, Vietnam, ended abruptly without an agreement on Thursday, the White House said after the two leaders cut short their discussions.

“Sometimes you have to walk, and this was just one of those times,” Trump said, adding: “it was a friendly walk.”

“It was all about the sanctions,” Trump said. “Basically, they wanted the sanctions lifted in their entirety, and we couldn’t do that.”

After Trump made his comments, North Korean Foreign Minister Ri Yong Ho told a news conference in Hanoi that North Korea had sought only a partial lifting of sanctions “that hamper the civilian economy and the livelihood of our people”.

He said his country had made “realistic” proposals including the complete decommissioning of the Yongbyon nuclear research centre, under the watch of US observers.

Mr Ri said Pyongyang had also offered to permanently halt nuclear and long-range rocket testing. He added that it might be hard to see an opportunity such as the Hanoi summit again.

“Our principal stand will remain invariable and our proposals will never change, even if the United States proposes negotiations again in the future,” he told reporters.

On the flight back to Washington, US Secretary of State Mike Pompeo said he was hopeful that the two sides could resume talks before too long.

This was the second summit after some eight months since the two leaders’ landmark first meeting in Singapore.