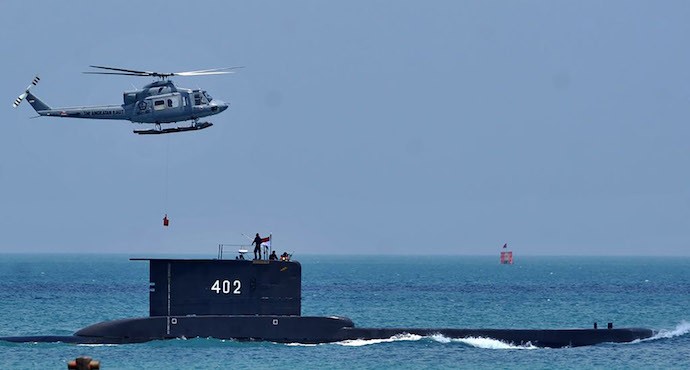 Indonesian president sends condolences to families of the sunken submarine

Indonesia’s Navy changed the status of its missing submarine from “sub miss” to “sub sank”, diminishing hopes of finding any of the 53 crew members alive.

Military chief Hadi Tjahjanto said the presence of an oil slick as well as debris near the site where the submarine last dove Wednesday off the island of Bali were clear proof the KRI Nanggala 402 had sunk.

The officials said that a scan had detected the submarine at 850 metres (2,788 feet), well beyond its survivable limits. Authorities now expect to carry out an evacuation process to recover the KRI Nanggala-402 submarine and its crew, Indonesian Navy Chief of Staff Yudo Margono said.

Yudo said an explosion was not believed to have occurred on the submarine but that heavy pressure on the vessel likely created a crack through which some items escaped. In the past days, searchers found parts of a torpedo straightener, a grease bottle believed to be used to oil the periscope, prayer rugs and a broken piece from a coolant pipe that was refitted on the submarine in South Korea in 2012.

Family members are still hoping for a miracle but there has been no sign of life from the vessel so far.

Warships, planes and hundreds of military personnel have been searching for the missing vessel. An American reconnaissance plane, a P-8 Poseidon, landed early Saturday and had been set to join the search, along with 20 Indonesian ships, a sonar-equipped Australian warship and four Indonesian aircraft. Officials said that the sub was equipped with enough oxygen for only three days after losing power. The deadline passed early Saturday.

The German-built diesel-powered KRI Nanggala 402 had been in service in Indonesia since 1981 and was carrying 49 crew members and three gunners as well as its commander, the Indonesian Defense Ministry said.

KRI Nanggala-402 lost contact on Wednesday morning during a military exercise in the Bali Strait.