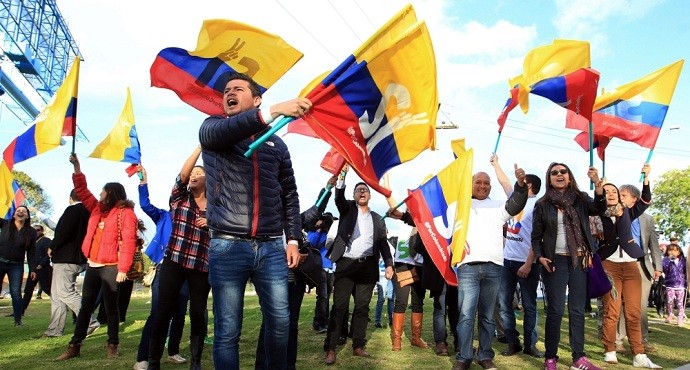 A permanent cease-fire took effect in Colombia on 29 August 2016, a major step in bringing an end to 52 years of bloody combat between the government and the country’s biggest rebel group.

“The war is over,” declared Humberto de la Calle, chief government negotiator, after signing the deal in Havana, where talks have been held since November 2012. “It is the time to give peace a chance.

“Today marks the beginning of the end of the suffering, the pain and the tragedy of the war,” President Santos said in an address to the nation after the announcement in Havana.

Colombians gathered in a central Bogota square to watch the announcement live on a large screen. They burst into cheers as they watched Márquez and De la Calle sign the deal. “This is a historic moment and I wanted to share it with other people,” said Bogota resident Andrés García.

The comprehensive deal addresses both the root causes of the conflict and its most nefarious consequences, while laying out a calendar for the FARC’s estimated 7,000 fighters to lay down their arms and reintegrate with Colombian society.

Juan Manuel Santos, Colombia’s president, said on Twitter: “This August 29 a new chapter begins for Colombia. We are putting down our weapons. We’ve ended the war with FARC.”

Hundreds of thousands of Colombians have died since 1964 as government forces and FARC fighters battled in the jungles in what is considered Latin America’s last major civil armed conflict.

On October 2, Colombians will go to the polls to cast ballots in a referendum that Santos hopes will endorse the peace agreement.

The Colombian president, Juan Manuel Santos, announced that a national plebiscite would take place on 2 October for voters to either accept or reject the accord. Leader of FARC militia group Rodrigo Londono Echeverri, alias ‘Timochenko’, spoke in Havana, Cuba, Aug. 28 ‘Timochenko’ declared the definitive cease-fire between FARC and the government forces after an agreement was reached between the two sides.

Brief history of the Colombia war and conflict

The war in Colombia lasted more than five decades of battle between the Revolutionary Armed Forces of Colombia (known by the Spanish acronym FARC) and the country’s government. It began in 1964, after the success of the Cuban revolution, with the rebels wanting to forcibly redistribute wealth.

In last 50 years of conflict, the armed group seized territory, attacked government forces and interfered with political life. file kidnappings. One of the group’s most notorious feats was the capture of presidential candidate Ingrid Betancourt in 2002, who was held deep in the jungle for six years before she was rescued in a Colombian military operation.

FARC also turned to the drug trade, making millions from trafficking in cocaine. It was designated a terrorist group by the United States and the European Union.

The rebels forced children to become soldiers, training them as guerrillas to lay mines and fight.

As the decades passed, thousands upon thousands of people were killed. Up to 260,000 died in the insurgency and as many as 6 million people were displaced — more than 1 out of every 10 Colombians.

A ceasefire brokered in 1984 included the release of a number of imprisoned guerrilla fighters. That truce ended in 1990 when several thousand former FARC members were killed. Another attempt fell apart in 2002.

Talks about talks began again in August 2012 and the two sides met in Havana the following November. Cuban President Raul Castro presided over the negotiations that went on (and off and on) for four years before a ceasefire deal was signed this June.

That was another step on the way to the full peace deal, signed Wednesday by President Juan Manuel Santos and rebel leaders.

1964: Set up as armed wing of Communist Party

2008: The group’s worst year, when it suffered a series of bitter defeats