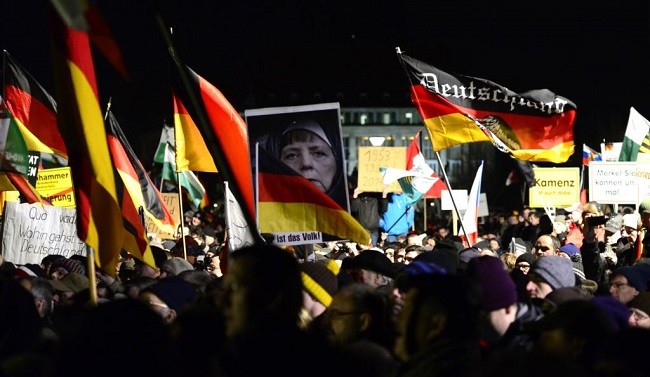 Thousands of people together with German politicians and religious leaders have attended a rally against Islamophobia.

Germany’s Chancellor Angela Merkel and President Joachim Gauck were among the demonstrators participating at the vigil staged near Berlin’s historic Brandenburg Gate on Tuesday by the Central Council of Muslims and Turkish Community in Germany.

“Let us stand together for each other. Terror: not in our name!” was the slogan of the vigil.

Merkel condemned movements against Islam in the country, calling on Germans to avoid marginalizing Muslims or other minorities.

“Excluding population groups due to their faith or their origin is beneath the dignity of our liberal state,” she said in a speech, adding, “Hatred of foreigners, racism and extremism have no place in this country.”

Gauck also called on Germans to act as a united and integrated nation and refrain from acting against Islam and fueling Islamophobia in the country.

“The terrorists want to drive us apart, they have achieved the opposite,” Gauck said, adding, “We are all Germany — we, democrats with our different political, cultural and religious backgrounds — we, who respect and need each other.”

Meanwhile, head of the Central Council of Muslims, Aiman Mazyek, addressed the gathering, saying, “We will not allow that our faith to be abused.”

The vigil also condemned anti-Islam movements by the extremist group PEGIDA, which claims to be countering what it calls the Islamization of the West.

PEGIDA is a German acronym for a phrase that means the “Patriotic Europeans against the Islamization of the West.”

The participants in the rally also condemned recent acts of terrorism in the French capital, Paris, against a satirical weekly.