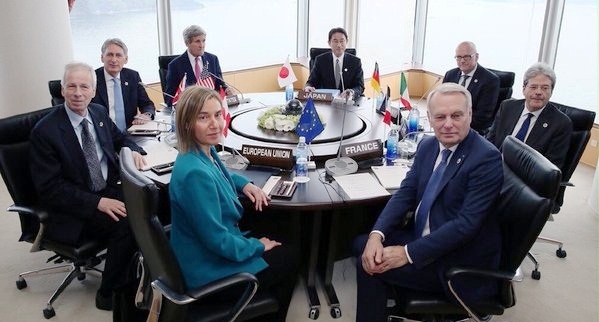 HIROSHIMA, (Japan) – Seven decades after it was struck by an atom bomb, Hiroshima, witnessed a commitment from global powers to build a world without nuclear arms.

“We reaffirm our commitment to seeking a safer world for all and to creating the conditions for a world without nuclear weapons in a way that promotes international stability,” G7 ministers said in a written declaration on nuclear disarmament.

Foreign ministers from the Group of Seven (G7) industrialized countries, concluded a historic two-day meeting in Hiroshima with adoption of a joint communique, a Hiroshima Declaration and two other statements on maritime security and nonproliferation.

“Terrorism is an urgent global security threat that requires international collaboration and unified responses,” they said in a statement at the end of a two-day meeting in the Japanese city of Hiroshima.

The declaration also said the task is made more complex by the deteriorating security environment in countries such as Syria and Ukraine, as well as by North Korea’s “repeated provocations.”

“I hope that a strong message of peace, stability and prosperity will be sent out to the world at the Hiroshima G7 foreign ministers’ meeting,” Japanese Foreign Minister Fumio Kishida said.

The statement emphasizes the importance of the Treaty on the Non-Proliferation of Nuclear Weapons (NPT), called for a ban on nuclear test explosions, and demands that all states “sign and ratify the Comprehensive Nuclear-Test Ban Treaty without delay and conditions,” although the U.S. itself has not yet done so.

Foreign Ministers of Canada, France, Germany, Italy, Japan, the United Kingdom, the United States and the High Representative of the European Union, gathered in Japan on April 10-11 to address a number of major international issues that impact global peace, security and prosperity.

Several dozen protesters gathered near the Hiroshima memorial Sunday to protest the presence of the G7 meeting and G7 countries that had possessed nuclear weapons.

The choice of venue is symbolic. It was here that the US dropped an atomic bomb in 1945 which led to the end of the war. The bombing resulted in the deaths of about 140,000 people. Three days later, the U.S. dropped a second bomb on the Japanese port city of Nagasaki, killing about 70,000 people.

John Kerry has become the first US secretary of state to pay his respects at Hiroshima’s memorial to victims of the 1945 US nuclear attack, along with his counterparts from the Group of Seven advanced economies.

Asked if Kerry, the first U.S. secretary of state to visit Hiroshima, would apologize for the U.S. decision to bomb the city, a senior State Department official said, “No.” U.S. Secretary of State John Kerry and other Group of Seven foreign ministers on Monday, the second day of their meeting in Hiroshima, visited Peace Memorial Park, a World War II memorial.

“It is a stark, harsh, compelling reminder not only of our obligation to end the threat of nuclear weapons, but to rededicate all our effort to avoid war itself.

Honoured to pay first ever G7 visit to #Hiroshima Peace Memorial. Remembering the past to build peace for the future pic.twitter.com/aZWvOtF6eV

In a separate, detailed statement on maritime security, the G7 ministers voiced their strong opposition to provocative attempts to change the status quo in the East and South China Seas, an apparent reference to China, which is locked in territorial disputes with other nations including the Philippines, Vietnam and Japan.

Earlier, Chinese Foreign Minister Wang Yi called for the participating ministers not to “hype up” the South China Sea issue.