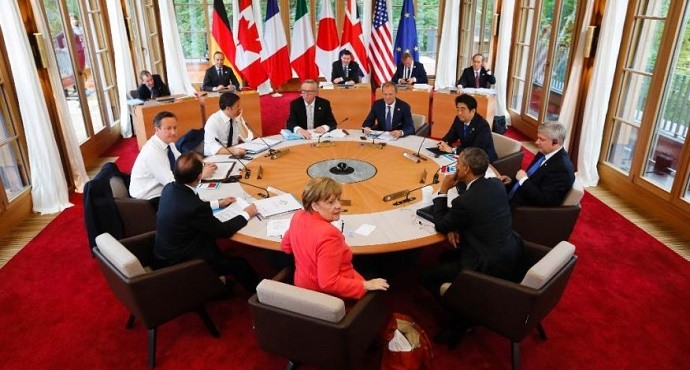 World leaders have begun their final day of G7 talks in the Bavarian Alps. The first day saw a firm stance on Russian sanctions; Monday’s talks are expected to focus on global security.

Leaders of the Group of Seven – the US, UK, Canada, Italy, France, Japan and Germany – on Sunday vowed to keep sanctions against Russia in place over its actions in eastern Ukraine and support of separatists there.

The meeting of leading industrialized democracies was the second in a row without Russia, which was ejected from the former G8 last year and is the target of US and EU sanctions.

German Chancellor Angela Merkel urged the global community to stand firm against Russia, and adhere to a Ukraine ceasefire deal agreed in February in Minsk.

“I expect that we should send a firm signal here. Not sanctions as an end to itself, but sanctions … to reach a target,” Merkel told Germany’s public ZDF television.

The Canadian and Japanese prime ministers, Stephen Harper and Shinzo Abe, made a point of visiting Kyiv on the way to Germany, amid a recent flare-up in fighting that has left more than two dozen dead.

European Council President Donald Tusk said Russia’s possible return to the group depended on an about-face in its foreign policy. For the moment, he said, the EU was faced with the question of whether the sanctions should be stronger.

British Prime Minister David Cameron said he would push for sanctions to be maintained against Moscow, even though some countries – like Greece – were suffering from reduced investment coming from Russia.

“It has an impact on all countries in terms of putting sanctions on another country,” Cameron said.

The situation between Greece and its international lenders is another pressing issue. There are fears a potential default by Athens could lead to Greece exiting the eurozone. The G7 leaders are set discuss these concerns in side talks with Christine Lagarde, the head of the International Monetary Fund.

Thousands of protesters took to the streets around the venue on Sunday, but were kept at a distance by German police.

The leaders of Iraq and Nigeria, countries battling deadly Islamist violence, have also been invited to the talks. Iraqi Prime Minister Haider al-Abadi is to discuss an ongoing offensive from the “Islamic State” (IS) militant group, which has seized over a third of his country’s territory.

Abadi will also meet privately with US President Barack Obama to discuss the Washington-led campaign to help recover Iraqi territory lost to IS.

Nigeria’s newly-elected President Muhammadu Buhari will ask the G7 for more help in fighting an insurgency by Boko Haram militants. There have been at least 11 separate attacks that have left more than 90 dead in the week since he took office.

Other topics up for discussion include Japan’s concerns over Chinese aggression in the South China Sea; the proposed free-trade agreement between the US and EU, known as the Transatlantic Trade and Investment Partnership (TTIP); and lessons learned from the recent Ebola crisis in West Africa.