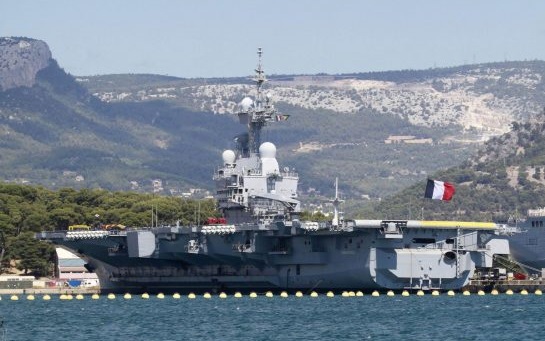 France is sending a nuclear aircraft carrier to the Middle East in the wake of a terror wave in Paris, which “justifies” the move, according to President Francois Hollande.

In a Wednesday speech onboard the warship off France’s southern coast, Hollande said that the situation in the French capital “justifies the presence of our aircraft carrier.”
He made the remarks among French military members aboard the Charles de Gaulle aircraft carrier, bound for the Middle East to join the US-led coalition forces allegedly fighting against the ISIS Takfiri militants.

“Thanks to the Charles de Gaulle, we will have intelligence. We may also conduct operations in Iraq,” said the French president.

The announcement was made as the new issue of the Charlie Hebdo magazine, whose headquarters came under a deadly attack last week, sold out before dawn.

The new issue, slammed by Muslims across the globe, contains a caricature of Islam’s Prophet Muhammad (peace be upon him).

A recent wave of terrorist attacks in France began on January 7, when the Paris office of Charlie Hebdo came under assault by two gunmen. Twelve people were killed in the incident that was followed by other terrorist attacks claiming five more lives.

Two brothers, Said and Cherif Kouachi, suspected of murdering the journalists, were killed after being cornered at a printing workshop in the town of Dammartin-en-Goele, two days after the satirical weekly attack.

In a posthumous video released on Sunday, Amedy Coulibaly, a gunman who killed four hostages in another terror attack at a Paris supermarket on Friday before he was slain by police, claimed he was acting on behalf of the ISIL Takfiri group in coordination with the two brothers who attacked Charlie Hebdo.

Many critics say the terror acts were a false flag operation launched by spy agencies, including Mossad and CIA.