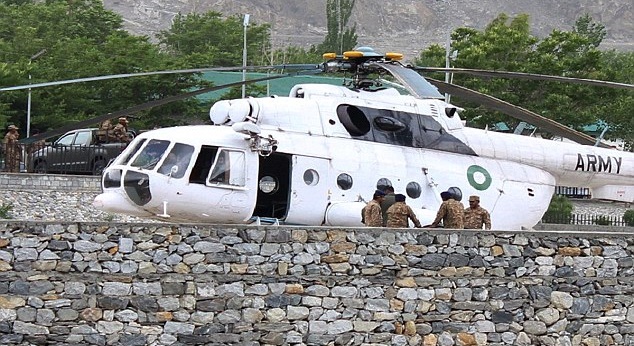 GILGIT (Pakistan): The ambassadors of Norway and Philippines and four others were killed when an army helicopter MI-17 crashed in Naltar area of Gilgit on Friday, according to Inter-Services Public Relations (ISPR). L to R: The Ambassador of the Philippines , Domingo D. Lucenario Jr and the Ambassador of Norway,Leif H. Larsen, were among those killed in the ill-fated helicopter crash on Friday in Gilgit, Pakistan.

Three Pakistani killed in the fatal accident were identified as two pilots, Major Altamash and Major Faisal, and one crew member.

The aircraft was carrying around 11 foreigners and 6 Pakistani passengers.

Media said 11 foreigners and six Pakistanis were on board the MI-17, which crashed into a school Gilgit and caught fire.

Military spokesman Asim Bajwa said in a Twitter post that as well as the four foreigners, the two pilots were killed.

Other Foreign Envoys on board

According to a list of passengers obtained by media, the ambassadors of Indonesia, Lebanon, Malaysia, the Netherlands, Romania, Norway, South Africa, the Philippines and Poland were scheduled to fly on the helicopter.

“It was a diplomatic trip with members of 37 countries in total,” said a passenger in one of the helicopters, who requested anonymity, adding that the school had caught fire after the crash.

The trip was mainly organised for tourism purposes, however, the ambassadors were expected to hold high-level meetings, including one with the G-B chief minister.

The injured were being air lifted to Combined Military Hospital in Gilgit, the region’s administrative capital, some 50 kilometers (30 miles) to the southwest, added a senior local police official. The injured were being air lifted to Combined Military Hospital in Gilgit after the helicopter crash.

The helicopter was on route to the city of Gilgit where Prime Minister Nawaz Sharif was to attend a public ceremony to inaugurate the newly installed chair-lift at a ski resort.

The diplomats were travelling to the mountainous northern region of Gilgit with a delegation of Prime Minister Nawaz Sharif (who was on a separate aircraft) when the accident happened.

The prime minister was enroute to Gilgit when the “tragic news” was conveyed to him after which he cancelled his visit and returned to Islamabad.

Fifty-seven people, including 32 men, 20 women and five children were on their way to Naltar, Gilgit on a Foreign Office-organised trip when one of the three helicopters crashed on the way.

The helicopter is said to have crashed into Army Public School in the area. The cause of the crash is yet to be known. The scene of crash in Gilgit where Pakistani helicopter carrying foreign diplomats crash-landed on Friday 8 May 2015.

Prime Minister Mr Sharif and President Mamnoon Hussain have expressed deep grief and sorrow over the incident according to a statement. The President stated that the government and people of Pakistan are deeply saddened over the tragic death of foreigners in the unfortunate incident and equally share the grief of the affected families.

Prime Minister Nawaz Sharif has declared one-day mourning over the Naltar helicopter crash which claimed lives of six people including Norwedian and Philippine ambassadors and injured 13 others.

The Taliban has reportedly claimed responsibility for downing a military helicopter and said Prime Minister Nawaz Sharif was their target.

“The helicopter was shot down by an anti-aircraft missile, killing pilots and many foreign ambassadors,” an Urdu-language statement emailed by their main spokesman Muhammad Khorasani said.

It was not immediately possible to verify the claim.

However, earlier statements of Pakistan government and Army officials claimed the helicopter developed a technical fault while landing and did not immediately respond to queries about the Taliban claim.

Known for its spectacular mountain ranges and unique culture, Gilgit-Baltistan is a strategically important autonomous region that borders China, Afghanistan and Indian-held Kashmir.