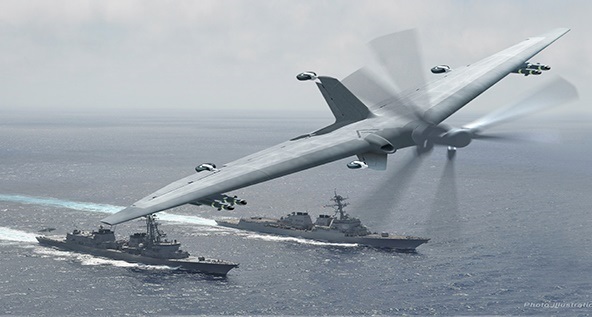 The vertical take-off and landing (VTOL) aircraft can land anywhere, and turn any US Navy ship into an aircraft carrier as it simply lands on its tail – a design first tested in the 1950s

TERN, a joint program between DARPA (Defense Advanced Research Projects Agency) and the U.S. Navy’s Office of Naval Research (ONR), can increase effectiveness of small-deck ships with unmanned air systems (UASs) to provide intelligence, surveillance and reconnaissance among other capabilities.

‘Small-deck ships such as destroyers and frigates could greatly increase their effectiveness if they had their own unmanned air systems (UASs) to provide intelligence, surveillance and reconnaissance (ISR) and other capabilities at long range around the clock,’ DARPA and the U.S. Navy’s Office of Naval Research said.

As part of TERN’s ongoing progress toward that goal, DARPA has awarded Phase 3 of TERN to a team led by the Northrop Grumman Corporation to build a full-scale demonstrator system of the medium-altitude, long-endurance UAS.

Northrop Grumman has closed a two-year, $93.1 million other transaction agreement with DARPA to prototype and develop an unmanned aircraft system to launch and recover from small carrier ships.

“The design we have in mind for the TERN demonstrator could greatly increase the effectiveness of any host ship by augmenting awareness, reach and connectivity,” Dan Prat, DARPA program manager, said in a Dec. 28 press release.

“We continue to make progress toward our goal to develop breakthrough technologies that would enable persistent ISR and strike capabilities almost anywhere in the world at a fraction of current deployment costs, time and effort,” he added.

In Phase 3, Darpa plans to build a full-scale demonstrator system of a medium-altitude, long-endurance UAS designed to use forward-deployed small ships as mobile launch and recovery sites.

DARPA launched the TERN programme to solve a capability problem for the US Navy. The service regularly operates small, tactical unmanned air systems, such as the Boeing/Insitu Integrator from frigate-class ships, using a catapult to launch the aircraft and a crane to recover it. But carrying payloads larger than about 30kg required using an unmanned helicopter, such as the Northrop MQ-8C Fire Scout, which can carry heavier loads but lacks the range and endurance of a General Atomics Aeronautics Systems MQ-9.

The TERN attempts to bridge that gap with a vehicle that can carry a 272kg payload on missions up to 900nm (1,670km).

TERN’s potentially groundbreaking capabilities have been on the Navy’s wish list in one form or another since World War II. The production of the first practical helicopters in 1942 helped the U.S. military realize the potential value of embedded vertical takeoff and landing (VTOL) aircraft to protect fleets and reduce the reliance on aircraft carriers and land bases.

The drone is a tail-sitter on land or decks, meaning the body takes off and lands like a helicopter, but turns 90 degrees once airborne to fly like a plane. It’s a medium-altitude long endurance vehicle.

The TERN Phase 3 design envisions a tailsitting, flying-wing aircraft with twin counter-rotating, nose-mounted propellers. The propellers would lift the aircraft from a ship deck, orient it for horizontal flight and provide propulsion to complete a mission. They would then reorient the craft upon its return and lower it to the ship deck. The system would fit securely inside the ship when not in use.