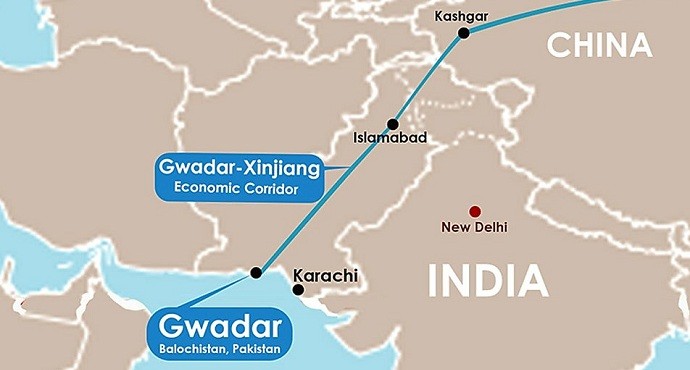 Chinese think tank has issued a warning to India, saying China will have to get involved if any Indian “plot” disrupts the $46 billion China-Pakistan Economic Corridor (CPEC) in Balochistan.

China will be forced to intervene if any action from India leads to disruption in the $46 billion China-Pakistan Economic Corridor (CPEC) in Pakistan’s western province of Balochistan, warns an influential Chinese think tank.

“China will have to get involved if any Indian plot disrupts the $46 billion China-Pakistan Economic Corridor (CPEC),” Hu Shisheng, the Director of the Institute of South and Southeast Asian and Oceanian Studies at the China Institute of Contemporary International Relations (CICIR).

Hu Shisheng is associated with one of the country’s most powerful think tanks, which is also is affiliated with the Ministry of State Security.

“The latest concern for Beijing is Prime Minister Narendra Modi’s speech from the Red Fort in which he referred to the issues like Kashmir (occupied by Pakistan) and Balochistan,” Hu said, according to Firstpost.

“It could be regarded as a watershed moment in India’s policy towards Pakistan. Why Chinese scholars are concerned is because this is for the first time India has mentioned it,” he added.

This is the first articulation by an influential Chinese academic about the prevalent thinking in Chinese Foreign Ministry about Balochistan and CPEC.

The CPEC is an important part of Xi Jinping’s pet project One Belt, One Road. It’s worth pointing put that a large portion of the CPEC runs through Pakistan’s restive Balochistan. The port of Gwadar is where the Chinese are planning to send finished goods across to Europe and import crude oil to China’s Xinjiang province.

The CPEC is a series of projects that connect China’s Xinjiang province to Pakistan’s Gwadar port in Balochistan. The 3000 km long CEPC, which is part of China’s Silk Road project, officially called Belt and Road is aimed at connecting the two countries with rail, road, pipelines and optical cable fiber network. India has strongly opposed the economic corridor as it passes through Gilgit-Baltistan and Kashmir region, which India has claimed sovereignty over.

This article published in Indian media reminds India of the gravity of the comment by the Chinese scholar.

“Even at the height of the Kargil War, China had not taken a public position backing Pakistan, a country which Chinese state media calls ‘iron brother’. This is the first time that the Chinese are articulating support to Pakistan in the event of a future armed conflict between New Delhi and Islamabad. This only lends further heft to the worst fears of India’s security forces: a two-front war with both China and Pakistan.”

Pakistan has long accused India of creating troubles in the region. However, India has always denied such claims.

However, Modi’s reference to the region, experts say, is a signal to Pakistan that New Delhi could raise tensions in the region as a tit for tat for Pakistan’s backing for terrorists in Jammu and Kashmir.

“This will not help Pakistan to become a normal country. And it will also further disturb India-China relations,” Hu pointed out.

Hu noted the growing defence cooperation between India and the US was also a worrying factor of China.

In his interview, the expert also said that India’s strengthening military ties with the U.S. as well as its stance on the South China Sea dispute has also become a cause for concern for China.