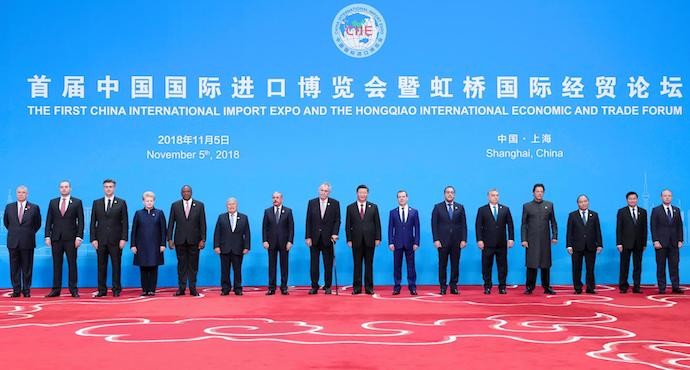 SHANGHAI – Chinese President Xi Jinping opened the world’s biggest trade fair in Shanghai lauding China as a champion of free trade and globalization and condemned “protectionism”, in a world defined by trade wars. Mr. Xi described China as an advocate for international openness and cooperation.

The first China International Import Expo (CIIE) kicked off on Monday in Shanghai under the theme of “New Era, Shared Future.”

“The vision for a better world for all calls on countries to act with greater courage and actively champion openness and cooperation. It is important for all countries to open wider….openness brings progress, while seclusion leads to backwardness,” Mr Xi said. “Openness has become a trademark of China.”

Mr. Xi said China would lower import tariffs and continue to make it easier for US firms to gain access to the attractive Chinese consumer market.

There are 18 heads of state attending the event, including leaders from Pakistan, Russia and Vietnam. However, the Western leaders remained absent.

Representatives of 172 countries, regions and international organizations are attending the conference that features more than 3,600 companies in an exhibition area of 300,000 square meters. More than 400,000 Chinese and foreign buyers are attending the expo to explore the business deal. The week-long event aims to give a multi-billion dollar boost to imports.

To broaden its opening-up, China will step up efforts in the following aspects:

The head of state of Pakistan, a country seen as China’s closest ally, attended the expo and also delivered a keynote address at the occasion. Prime Minister Imran Khan on Monday termed the China Pakistan Economic Corridor (CPEC) as a “mechanism” which would not only help the regional economy but also increase connectivity.

In his keynote address at the China International Import Expo in Shanghai, the PM said: “CPEC is a mechanism that will forge even closer connectivity between the Middle East and China and between central and South Asia.”

PM Khan lauded Chinese President Xi Jinping’s vision to open the “doors of China” to the world “at a time when the international trade system is under attack, when unilateral commercial benefits are being sought aggressively by some [and] when protectionism is on the rise”. Earlier, China and Pakistan also agreed to do business in their own currencies, Pakistani rupee and Chinese currency Yuan, instead of dollar.