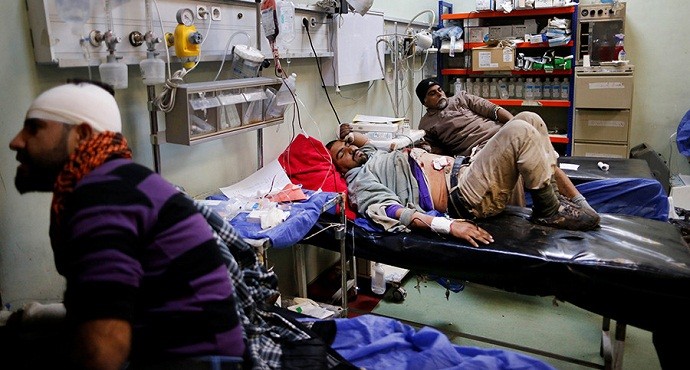 At least 12 people, including five children, have been hospitalized for possible exposure to chemical weapons agents inside Iraq’s eastern Mosul, the Red Cross said on Friday.

The Iraqi forces launched the offensive to retake the Daesh-held western districts of Mosul on February 19. The eastern half of the city was recaptured in January after 100 days of fighting.

“During the past two days, the hospital has admitted five children and two women showing clinical symptoms consistent with an exposure to a blistering chemical agent,” Robert Mardini, the Red Cross Middle East director, said in a statement, referring to a facility near Mosul.

The Islamic State jihadist group, which holds the majority of west Mosul, has periodically used rudimentary chemical weapons in the course of its more than two-year war with Iraqi forces.

Alleged chemical attack in Mosul would be war crime: UN

The United Nations has warned that the alleged use of chemical weapons in Iraq’s Mosul, if confirmed, would be a war crime and a violation of international humanitarian law.

“This is horrible,” said Lise Grande, the humanitarian coordinator in Iraq, in a March 4 statement. “There is never justification — none whatsoever — for the use of chemical weapons.”

The first indication of a potential use of chemical weapons came on March 3, when the International Committee of the Red Cross (ICRC) said seven people — five children and two women — had shown symptoms indicative of exposure to a chemical agent.

ISIS unleash a plethora of suicide bombers against Iraqi forces

ISIS carries out over 10 suicide attacks a day

Daesh (ISIS) has intensified suicide attacks on the Iraqi army as the battle for the troubled city enters its third week.

At least 125 suicide bombings have been recorded since the operation was launched last month, many of them with deadly outcomes for the troops, the Iraqi military said.

Iraq’s interior ministry said on Friday that 14,000 people fled the northern Iraqi city on Thursday alone, the largest wave of internally displaced people (IDPs) since a US-backed operation in west Mosul was launched on February 19.

The total number of IDPs who fled western Mosul since the start of the military push has reached 46,000, the ministry said.

West Mosul is the largest population center still controlled by the ISIS group.

Iraqi forces have yet to advance deep into west Mosul but fighting combined with privation and harsh IS rule is pushing a growing number of civilians to flee.