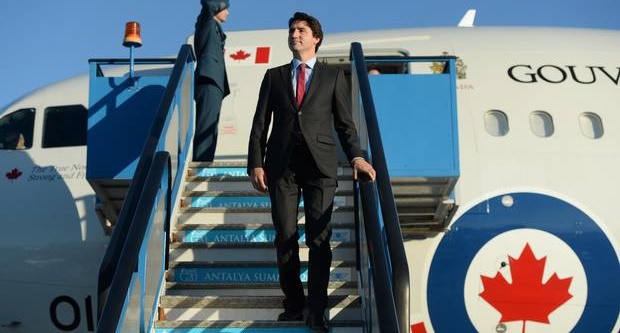 ANTALYA, (Turkey) — Prime Minister Justin Trudeau plans to follow through with his commitment to withdraw Canadian warplanes from Iraq and Syria and to resettle 25,000 Syrian refugees despite Friday’s terrorist attacks in Paris.

Trudeau arrived in Turkey under dark clouds on Saturday, as the Paris attacks overshadowed his first appearance on the world stage as Canada’s prime minister.

Mr. Trudeau did not speak to reporters Saturday, but a senior official from the Prime Minister’s Office confirmed Saturday evening that the Canadian government stands by its refugee plan and its position on the role Canada should play in the Syrian conflict.

The deadly spree of violence in Paris presents a clear challenge to Canada’s new Prime Minister as he aims to promote the humanitarian and economic benefits of fast-tracking 25,000 Syrian refugees into Canada before the end of the year.

Finance Minister Bill Morneau, who is also attending the G20 meetings, told Canadian reporters late Saturday that issues of security and refugees will understandably take on greater importance at the meeting than previously planned.

The deadly series of attacks in France’s capital that killed at least 120 and left many more injured has put a lot of pressure on western states.

French President François Hollande has declared the attacks an “act of war,” while others leaders, even as British Prime Minister David Cameron and U.S. President Barack Obama promised to continue standing shoulder to shoulder with France in the fight against ISIS.

But “the deadly terror attacks in Paris will not lead Canada to change course on its two main policies in relation to Syria: welcoming 25,000 refugees this year and ending Canada’s bombing campaign in Iraq and Syria” according to a report in The Globe and Mail.