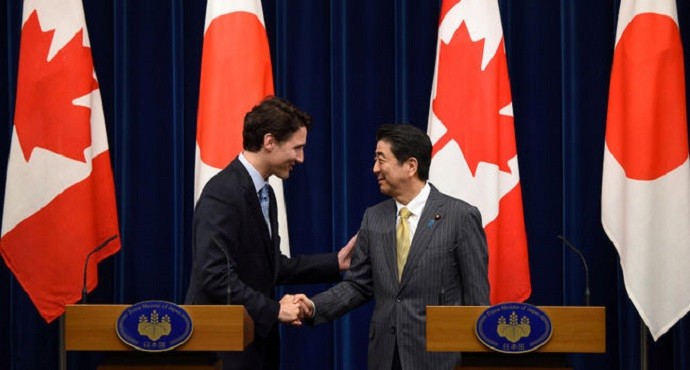 Canada and Japan signed a military co-operation agreement ahead of Sunday’s G7 foreign ministers meeting where the North Korean nuclear crisis will be front and centre.

Canadian Foreign Affairs Minister Chrystia Freeland and her Japanese counterpart, Taro Kono, signed an efficiency agreement on Saturday night that will allow each other’s militaries to share equipment during joint exercises in Canada, Japan and elsewhere.

I was also very pleased to sign a new military cooperation agreement with Japan that will allow us to share military equipment during operations and exercises in #Canada, #Japan, and other locations. #ACSA pic.twitter.com/4Oa5DWuith

“The Honourable Chrystia Freeland, Minister of Foreign Affairs, and Taro Kono, Minister for Foreign Affairs of Japan, signed the bilateral Acquisition and Cross-Servicing Agreement (ACSA). This agreement will strengthen cooperation between the Canadian Armed Forces (CAF) and the Japanese Self-Defense Forces and will allow both countries to make efficient use of each other’s military equipment during operations and exercises in Canada, Japan and other locations,” the Global Affairs department of the Canadian government said in a statement said.

The deal will also boost bilateral cooperation in peacekeeping activities, and tackling humanitarian crises and natural disasters, the document noted.

Freeland and Kono met last month in Tokyo where they affirmed their commitment to keep economic and diplomatic pressure on North Korea to end its nuclear program when they meet with their G7 counterparts today in Toronto.