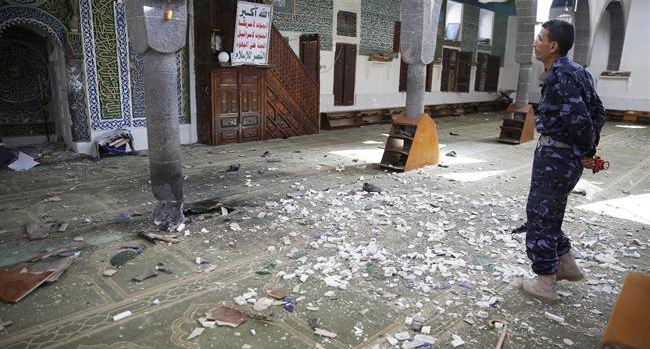 SANAA (Yemen) – A suicide bomber blew himself up during prayers at a mosque for the Eid al-Adha holiday on Thursday, killing 25 people in Yemen’s capital Sanaa, security officials said.

Dozens were wounded in the blast at the al-Bolayli mosque, said the officials, who remain neutral in the conflict that has splintered the country. It is located in an area where many people support the Shiite Houthi rebels who control Sanaa.

Eid al-Adha is a major Muslim holiday also known as the feast of sacrifice.

Officials say the bomber placed an explosive device in his shoe, and when that initial bomb went off, he detonated himself in the middle of the crowd. Dozens of other people are wounded.

There was no immediate claim of responsibility but Sanaa has been shaken by a string of bombings by the Islamic State (IS) jihadist group in recent months targeting Shias.

Thursday’s blast ripped through the Balili mosque where Houthi Shia rebels who control Sanaa go to pray, according to witnesses.

Yemen has been torn by a ferocious war pitting the Houthis and forces fighting for former President Ali Abdullah Saleh against fighters loyal to President Abed Rabbo Mansour Hadi, as well as southern separatists, local militants and extremists.