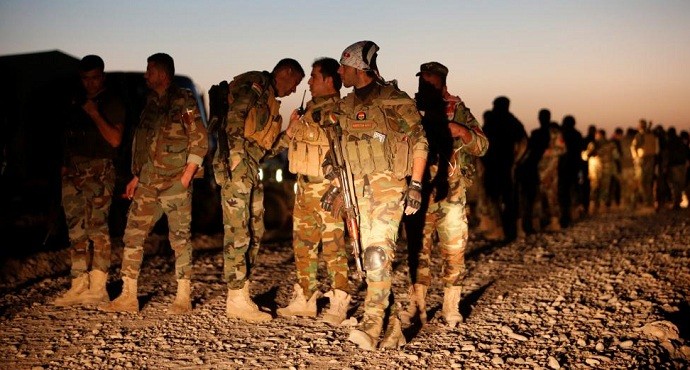 If successful, the liberation of Iraqi city Mosul would be the biggest blow yet to ISIS.

Two years after the terror group, ISIS, seized the Iraqi city of 1.5 million people and declared a caliphate there, a force of some 30,000 Iraqi and Kurdish Peshmerga forces and Sunni tribal fighters have began an offensive against ISIS.

Iraqi government forces and Kurdish forces launched a US-backed offensive on Monday, Oct. 17, 2016, to drive the Islamic State (IS) group from the northern city of Mosul.

Kurdish Peshmerga forces have managed to re-capture three villages in Khazer area, east of Mosul, from the ISIS control, according to latest reports by Iraqi media outlets.

The Mosul offensive is one of the most long-awaited fights to wrest the northern city of Mosul, Iraq’s second-largest city, from Islamic State of Iraq  and Syria (ISIS) militants. If successful, the liberation of Mosul would be the biggest blow yet to ISIS.

The offensive is a joint operation by more than 30,000 troops from the Iraqi army, Kurdish Peshmerga and a Shia paramilitary force, which are pushing in on the city from three sides.

The city is important to the group both strategically, for its proximity to its territory in neighbouring Syria and to its supply route through Turkey – as well as symbolically. “The time of victory has come and operations to liberate Mosul have started,” he said in an address broadcast by the Al Iraqiya channel. “Today I declare the start of these victorious operations to free you from the violence and terrorism of Daesh (IS),” he said, using an Arabic acronym for the terror group.

“The force leading liberation operations is the brave Iraqi army with the national police and they are the ones that will enter Mosul, not others,” al-Abadi added.

The hour has struck. The campaign to liberate Mosul has begun. Beloved people of Mosul, the Iraqi nation will celebrate victory as one

In a statement on Saturday, Masoud Barzani, the head of the autonomous Kurdistan region, said: “Baghdad and Erbil [the capital of Iraqi Kurdistan and seat of the partly autonomous regional government] have also agreed to establish a joint higher political committee whose task would be to supervise the affairs of Mosul after the liberation.”

The time has come to begin the liberation of Mosul https://t.co/vyvP1WzJEH The commander of the coalition, US Lieutenant General Stephen Townsend, said the operation to take Iraq’s second largest city would likely continue for weeks, “possibly longer”.

If Mosul falls, Raqqa in Syria will be the IS group’s last city stronghold.

“This is a decisive moment in the campaign to deliver ISIL a lasting defeat,” US Defense Secretary Ash Carter said in a statement, using another acronym for the Islamic State group.

“We are confident our Iraqi partners will prevail against our common enemy and free Mosul and the rest of Iraq from ISIL’s hatred and brutality.”

In Washington, US Defense Secretary Ash Carter on Monday called the launch of the Mosul operation “a decisive moment in the campaign” to defeat to IS.

The coordinated offensive involves sometimes rival forces, including Iraqi Kurdish peshmerga to the north and east of the city, with the Iraqi army, Sunni tribal units and Shiite militia moving in from the south. The Mosul operation has also raised grave concerns over an impending humanitarian crisis in a city where a million people still live.

Hours after the launch of the massive ground and air operation early on Monday, the UN said that an estimated 1.5 million people still live in the Mosul area, and up to one million people could flee their homes in search of safety.

Such a movement would create this year’s biggest and most complex humanitarian crisis in the world.

Stephen O’Brien, the UN’s under-secretary-general for humanitarian affairs, said in a statement that “depending on the intensity and scope of the fighting, as many as 1 million people may be forced to flee their homes in a worst-case scenario.”

He warned that civilians could be caught in the crossfire and may be used as human shields to protect IS fighters from US-led coalition airstrikes. Already overburdened aid organizations have warned that they are unprepared to handle large-scale humanitarian upheaval.