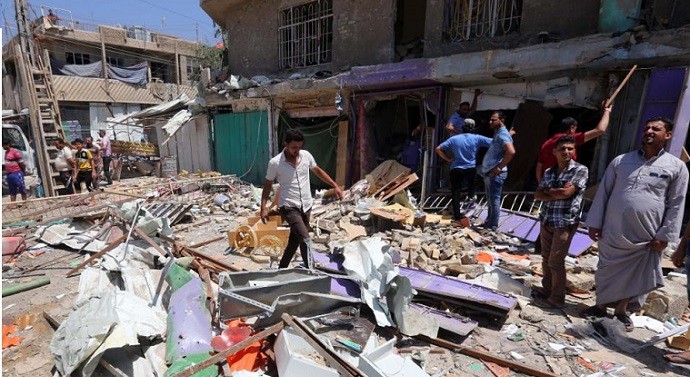 Militants unleashed a wave of bombings on Sunday targeting commercial areas in and around the Iraqi capital, killing at least 22 civilians, police and medical sources said, as clashes continued between government forces and Islamic State militants in the western province of Anbar.

Baghdad’s Khilani Square was the main location of the blast which claims life of around seven people and around 26 are injured because of the blasts.The car which was planted with bomb was parked near a Sunni mosque and a gathering of motorcycle vendors.

“Deash terrorists used a suicide car bomb attack to distract our soldiers and then they clashed with soldiers, but we managed to repel the attack,” an army officer from Anbar operations command told Reuters, using a derogatory acronym for Islamic State.

No group immediately claimed responsibility for any of the attacks, but Shi’ite areas and government forces are often targeted by Sunni Islamist insurgents the government is struggling to dislodge from large sections of the north and west.

Another six people were killed and 17 others wounded when a car bomb went off near Khilani Square in central Baghdad, sources informed.

The assault came a day after the radical militants took partial control of a water dam and military barracks guarding it in Anbar and detonated three suicide car bombs at a border crossing between Iraq and Jordan.

“Daesh attacked the northern gate of the refinery, but we managed to repel the attack and prevented them from infiltrating our defenses,” an army officer from the refinery said by phone.

Iraq’s army announced it was making progress in the battle against Islamic State militants in Anbar province on Sunday even as it struggled to retake territory lost over the weekend and a string of bombings rocked the capital.

After driving militants out of the northern city of Tikrit earlier this month, Iraqi forces have turned their attention to Anbar province, large parts of which have been under Islamic State control for more than a year. The see-saw conflict has seen both sides take and lose territory.

Defence Minister Khalid al-Obeidi said on Iraqi television that the army has achieved “90 per cent” of its objectives in the town of Garma, between Baghdad and the IS-held city of Fallujah. He added that an operation had been launched to retake the water control station on a canal lost over the weekend.