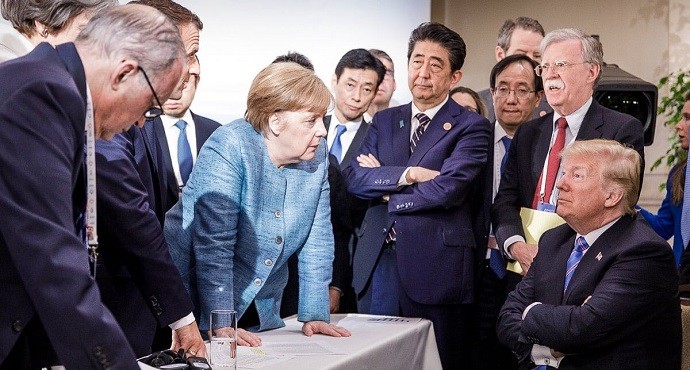 Trump, Merkel, Macron: the G7 photos worth a thousand words

The photograph released by German Chancellor Angela Merkel’s office about the G7 leaders’ meeting this past weekend seemed to perfectly sum up the state of affairs which is President Donald Trump versus the world.

The image depicts a “spontaneous meeting” featuring the German Chancellor in an assertive pose with both hands firmly on a table as she addresses an emotionless US President.

The image is said to perfectly capture the mood at the Quebec summit, overshadowed by disagreements over Mr Trump’s decision to impose higher tariffs on aluminium and steel.

The tension at the summit was summed up by this photo of members that looked like a Renaissance painting.

When Art History comes for you. pic.twitter.com/kCeq9nLqiy

However, German Chancellor Angela Merkel’s spokesman Steffen Seibert who tweeted the photo told reporters in Berlin Monday that his office “is connecting no interpretation” with the picture.

He added: “This is one scene from the discussions. The photographer had only very brief access to these discussions, and so we only had very few pictures, which were all very similar.”

Seibert noted that “other photographers captured other scenes.”

German journalist, Fabian Reinbold, tweeted a composite of photographs released of the discussions by delegations from six of the G7 nations.