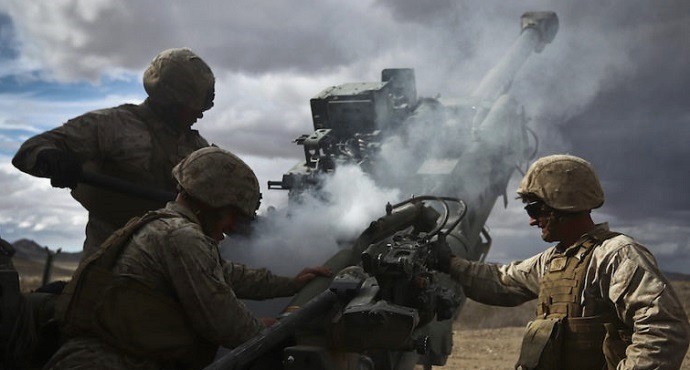 Almost 1,000 U.S. troops have arrived in northern Syria with artillery to support US-backed local forces fighting to oust the Islamic State group from its self-declared headquarters of Raqqa.

The US-backed fighters are preparing to move in the coming weeks to assault the city of Raqqa, ISIS’ self-declared capital, according to the officials.

According to the Pentagon, an additional “400 or so” Marines and Army Rangers have arrived in the last few days.

The deployment is temporary, said Coalition spokesman U.S. Air Force Colonel John Dorrian, and the additional forces were sent to Manbij in the coutnry’s north in order to create “reassurance.”

The forces would be working with local partners in Syria – the Syrian Democratic Forces and the Syrian Arab Coalition – and would not have a frontline role, he said.

The Washington Post was the first to report the deployment of the Marines.

The new mission comes as the Trump administration weighs a plan to take back Raqqa, the so-called capital of the Islamic State, that also includes more Special Operations troops and attack helicopters.

The new Marine mission was disclosed after members of the Army’s elite 75th Ranger Regiment appeared in the Syrian city of Manbij over the weekend in Strykers, heavily armed, eight-wheel armored vehicles.

According to DEBKAfile, President Donald Trump decided, after consulting with Defense Secretary James Mattis and National Security Adviser H.R. McMaster, that the US army would go it alone in the Raqqa offensive together with a single local force: the Kurdish-led Syrian Democratic Forces.

The SDF is composed of 45,000 fighters of the Syrian Kurdish YPG militia and 10,000 Arab tribesmen, most belonging to the north Syrian branch of the Shamar.