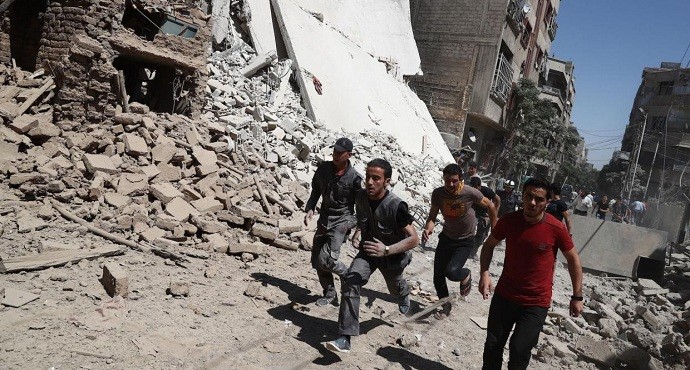 At least 100 people died in bombing raids on rebel-held parts of Aleppo and Idlib just hours after US and Russia agree ceasefire deal.

Air strikes on rebel-held areas of Syria reportedly killed at least 100 people hours after the US and Russia announced plans for a truce.

An air strike on a market in Idlib killed up to 60 people while at least 45 died in strikes on Aleppo province, opposition activists say.

The raids on Idlib and Aleppo were believed to have been carried out by Syrian army fighter jets, or those of its main ally Russia.

Aleppo, a major battleground in the conflict, has seen intensified fighting between government forces and the opposition in recent months, worsening the humanitarian situation there.

#Syria: pictures from the market of #Idlib today after it was struck by warplanes of the regimr pic.twitter.com/tNoexjzvhH

The surge in violence came hours after the US and Russia’s top diplomats announced the ceasefire agreement after 13 hours of talks in the Swiss city of Geneva.

The agreement, announced in Geneva by Secretary of State John Kerry and Russian Foreign Minister Sergei Lavrov after months of haggling over details, was hailed as a breakthrough in the quest to bring about a negotiated settlement to the five-year-old war which has killed as many as 500,000 people.

The accord included a truce to start across Syria at sunset Monday, the first day of the Muslim Eid al-Adha festival. The agreement also paved the way for joint US-Russian raids against armed groups in Syria, including the Islamic State of Iraq and the Levant group.

A 10-day truce is meant to start on Monday, followed by co-ordinated air strikes against jihadist militants.

Syria’s state news agency, SANA, said that the Geneva agreement had been reached “with full knowledge” of the Syrian government, which has approved it.

The deal goes further than a more limited one that collapsed earlier this year because it places U.S.-Russian military cooperation in the fight against terrorism at the center of the effort to end Syria’s war.