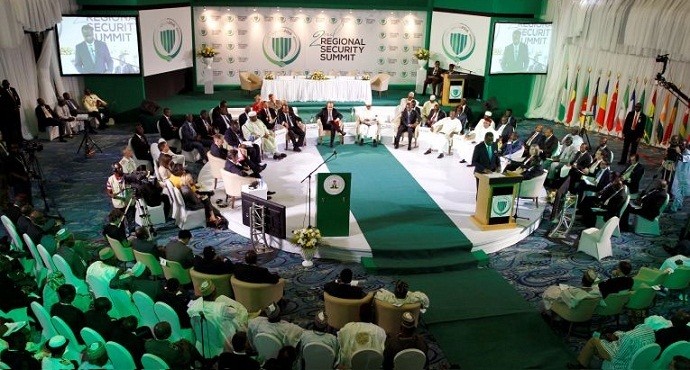 Regional and Western powers urged for a “global approach” to stop the threat from Boko Haram, at the 2nd Regional Security Summit in Nigeria.

Leaders from Benin, Cameroon, Chad and Niger were among the delegates, alongside French President Francois Hollande, and high-ranking diplomats from the US, UK and the European Union at the Summit.

Nigerian President, Muhammadu Buhari admitted that combating book haram and the “issue of security in Nigeria is more harrowing” with terrorists utilizing the latest technology.

President Muhammadu Buhari has assured that Nigeria will work with other countries to eliminate Boko Haram and called on West African countries to strengthen the Multinational Joint Task Force to rid the region of the last vestiges of the Boko Haram terror group.

Speaking at the Summit, France’s Hollande said because of Boko Haram’s links to ISIS and its status as “the world’s deadliest terrorist group”, it “remains a threat” and no-one should drop its guard.

Britain’s Foreign Secretary Philip Hammond describe the fight against extremist ideology as “a generational struggle against an evil that will destroy us if we do not destroy it”.

“We must sustain this fight until evil is defeated and good prevails,” he told the delegates, calling for countries affected to win the “hearts and minds of those terrorized by Boko Haram”.

US Deputy Secretary of State Antony Blinken warned that not addressing the drivers of extremism — poverty, deprivation, lack of opportunity and education — would create “Boko Haram 2.0” even if the group were defeated militarily.

But delegates were told that despite major gains since the last security summit two years ago in Paris, more needed to be done to eradicate Boko Haram and tackle the root causes of extremism.

Chad’s President Idriss Deby highlighted the threat from Libya, which has long been seen as a source for arms and explosives smuggled into the Sahel region and which is facing multiple threats from jihadist groups. Boko Haram fighters are reported to be in Libya, raising concerns about their possible return.

The UN Security Council on Friday said the talks should help develop “a comprehensive strategy to address the governance, security, development, socio-economic and humanitarian dimensions of the crisis”.

Nigeria is seeking closer military collaboration to end seven years of violence in the northeast, which has claimed at least 20,000 lived and displaced more than 2.6 million people from their homes.

Britain has committed nearly £40 million ($58 million, 51 million euros) to “counter and counter-extremism support” over the next four years. The EU has contributed 50 million euros to the MNJTF, said the bloc’s top diplomat Frederica Mogherini.

But Buhari said an estimated 960 million euros was required for short- and medium-term development in the Lake Chad region.

An 8,500-strong multinational force, made up of troops from Nigeria, Benin, Cameroon and Niger, has been fighting the group since last July. France and Nigeria recently signed an agreement on closer military cooperation, including intelligence sharing, and Paris plays a key role in Abuja’s sometimes difficult relations with its neighbours, which are former French colonies.

France has a military base in Chad, from which it launches anti-jihadist operations in the Sahel.

After a series of military successes since Buhari’s election last year, the president has declared in “technically” defeated but suicide bombings continue and its members are still hiding out on the Sambisa forest.

Much of the world learned of the Boko Haram terrorist group after they kidnapped 276 school girls from the town of Chibok in 2014, but the group that has been carrying out worse attacks in Nigeria first emerged in 2003.

Boko Haram regards the Nigerian state as being run by non-believers, even though the country had a Muslim president. Boko Haram initially focused on opposing Western education and launched military operations in 2009 to an Islamic state.

In 2014, Boko Haram captured swaths of territory in Nigeria and declared a self-styled caliphate. The next year, it declared allegiance to ISIS group.

Since Buhari became president of Nigeria, the Nigerian army has stepped up military actions against Boko Haram, leading the president to announce that the Islamist group had been “technically” defeated.

Boko Haram’s current and nearly seven-year insurgency has spilled beyond Nigeria’s borders. Attacks in Cameroon, Chad and Niger have claimed killed at least 20,000 people and forced more than 2.6 million people to flee their homes, including 300,000 children.