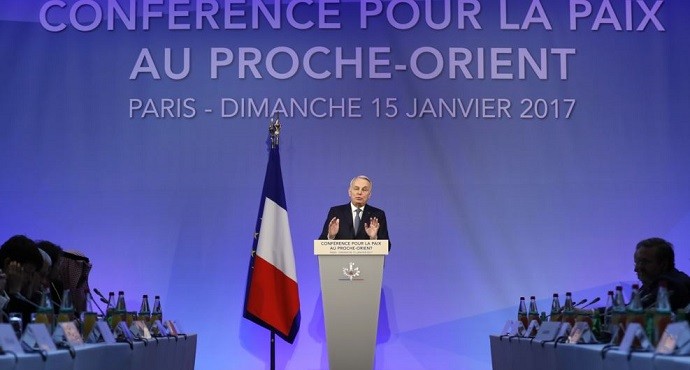 The international community has gathered in Paris to send a strong message across that only a two-state solution can solve the decades-old Israel-Palestinian crisis.

Foreign ministers and senior diplomats from 75 countries descended on Paris on Sunday to reignite the two-state solution of the conflict between Palestinians and Israelis.

The “Conference for Peace in the Middle East” is being held in France’s capital, Paris, despite massive objections from Israeli Prime Minister Benjamin Netanyahu and in the absence of Palestinian President Mahmoud Abbas.

French President Francois Hollande warned at the Paris conference that the two-state solution is threatened by the Israeli settlements and by Palestinian terrorists.

“The two-state solution is threatened due to settlements, as well as terrorists who were always afraid of peace,” Hollande says, adding that “all the conflicts in the Middle East made us think that the peace process can wait.”

Hollande notes that the two-state solution has wide support in the Middle East and remains the main objective of the international community despite all its differences. “How can we expect stability in the Middle East without solving the oldest conflict in the region?” Hollande asks.

U.S. Secretary of State John Kerry is attending, one of his last meetings before handing over control of U.S. diplomacy to Mr. Trump’s team. Trump has vigorously backed Israel’s position and pledged to move the U.S. Embassy in Israel to Jerusalem, a move seen by Palestinians as backing Israel’s claim on the city.

French Foreign Minister Jean-Marc Ayrault warned of “extremely serious consequences” if the US moves its embassy from Tel Aviv to Jerusalem as planned.

Paris Peace Conference is the second such meeting organized by the government of President Francois Hollande after a first in June, which was attended by more than 20 nations and groups.

“It’s a rigged conference, rigged by the Palestinians with French auspices to adopt additional anti-Israel stances.”

Netanyahu stressed that not only terrorist organizations are trying to destroy any chance for peace, but that they have also undertaken political efforts that destroy any chance for peace, like the Paris conference. “This pushes peace backwards. It’s not going to obligate us,” Netanyahu said. “It’s a relic of the past. It’s a last gasp of the past before the future sets in.”