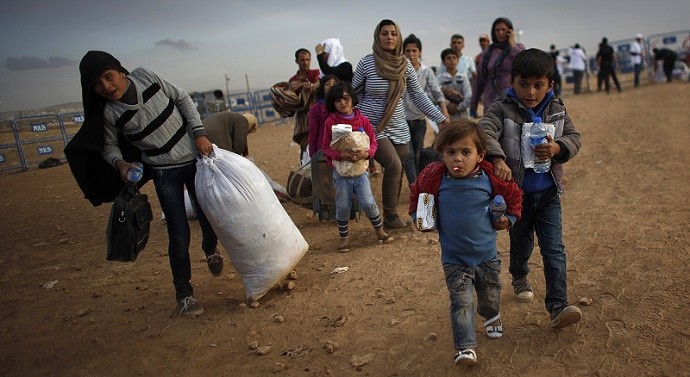 A record-breaking 38 million people worldwide were internally displaced in 2014, including 11 million who were newly displaced, because of violence and conflict according to a new report by the Geneva-based Internal Displacement Monitoring Center.

According to the report, the figure of 38 million is equivalent to the populations of London, New York and Beijing combined, and that violence last year forced an average of 30,000 people daily to flee their homes.

The report, which covered 60 countries, finds a majority of last year’s 11 million newly displaced were in five countries alone — Iraq, South Sudan, Syria, the Democratic Republic of Congo and Nigeria.

The worst displacement, it says, occurred in Iraq, where 2.2 million people were forced to flee from attacks by the Islamic State militant group.

Syria has the highest number of internally displaced people in the world, with at least 40 percent of its population or 7.6 million people uprooted within their country.

It is the third consecutive year that internal displacement figures have reached record highs.

The Norwegian Refugee Council (NRC) along with one of its partners, the Office of the UN High Commissioner for Refugees (UNHCR), released these alarming figures at a joint press conference in Geneva to launch the report, Global Overview 2015: people internally displaced by conflict and violence.

For the first time in more than a decade, the report notes Europe experienced massive displacement due to the war in Ukraine, where 646,500 people fled their homes in 2014. This brings the total number of people displaced by the war between the government and Russian-backed rebels to more than 1.2 million.

NRC Secretary-General Jan Egeland said: “This report should be a tremendous wake-up call. We must break this trend where millions of men, women and children are becoming trapped in conflict zones around the world.”

He warns national problems increasingly are turning into regional ones.

“There is a domino effect,” he said. “Boko Haram is now a problem not only for Nigeria, but, for the neighboring countries. [Islamic State group] is not only a tremendous displacer in Syria, but also in Iraq and vice versa. The problems are getting regional. The way it is now it cannot continue. What we hope is that this report will be a wake-up call [for] more and better national action for the most vulnerable and more and better international action for the most vulnerable.

Egeland says the right actions taken in a timely manner can head off the worst. For example, he says Yemen is at a crossroads and that the choice is between ending the conflict now and letting it develop into a tremendous war for the next 10 years.