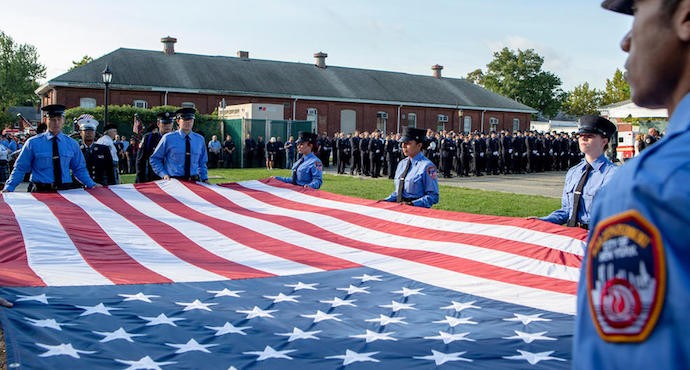 Families of 9/11 victims remember their loved ones on 18th anniversary of terror attack which killed 2,977

Family members of the nearly 3,000 victims of 9/11 gathered on Wednesday at the Ground Zero memorial site to mark the 18th anniversary of the Sept. 11, 2001, terror attacks.

Hundreds, including uniformed members of the NYPD, FDNY and Port Authority, turned out for the somber annual ceremony to honor those killed in the deadliest act of terrorism on US soil.

Nearly 3,000 people died when hijackers took control of four commercial airplanes and crashed them into the World Trade Center buildings, the Pentagon, and a field in Shanksville, Pennsylvania. More have died since from illnesses related to the destruction.

President Donald Trump marked the 18th anniversary of the Sept. 11 terror attacks on Wednesday by expressing his sympathy in a speech at the Pentagon. “They attacked the enemy,” Trump recalled last year as he stood on the Pennsylvania field where United Flight 93 crashed on Sept. 11, 2001. “They fought until the very end. And they stopped the forces of terror and defeated this wicked, horrible, evil plan.”

A crowd of victims’ relatives assembled at ground zero, where the observance began Wednesday with a moment of silence and tolling bells at 8:46 a.m.—the moment when a hijacked plane slammed into the World Trade Center’s north tower.

“As long as the city will gift us this moment, I will be here,” said Margie Miller who lost her husband, Joel. “Because I feel like if we don’t come, they don’t need to do it. And I want people to remember,” said Miller, of Baldwin, on Long Island. After so many years of anniversaries, she has come to know other victims’ relatives, and to appreciate being with them.

First responders who braved the hazardous toxins of what was “ground zero” recounted on Sept. 9 the sacrifice made by the Fire Department of New York (FDNY) on 9/11.

More than 200 first responders from the FDNY have perished from 9/11-related illnesses stemming from the aftermath of the terrorist attack. This year, 22 of their names were added to the FDNY Memorial Wall.

#FDNY members remember those who made the Supreme Sacrifice 18 years ago today, and those who have died from illness related to the World Trade Center rescue and recovery efforts, at the September 11th Commemoration Ceremony at the FDNY EMS Training Academy #NeverForget pic.twitter.com/wCJ2MrWj8U

On the 18th anniversary of the 9/11 terror attacks, NASA astronauts paid tribute to the heroes who risked their lives to save others on that day by tweeting a special message from space.

Honoring the brave public servants of @FDNY. Thank you for your service, we remember your fallen comrades. Your flag and patch are proudly orbiting the Earth on board the @Space_Station! #NeverForget pic.twitter.com/zxrNRmffsP

At the NATO Headquarters in Brussels, all flags were lowered in solidarity with US.

NATO Secretary General Jens Stoltenberg joined US Permanent Representative Kay Bailey Hutchison at the 9/11 and Article 5 Memorial at NATO Headquarters on Wednesday for a ceremony commemorating the 18th anniversary of the 2001 terrorist attacks on the United States. Mr. Stoltenberg affirmed that Allies stand united in the “global, generational fight” against terrorism.

“Europe and North America must continue to stand together now as we stood together on 9/11, united in our commitment to protect our people and our values.”

Today we commemorate the victims of the #September11 attacks.

All flags @NATO HQ are lowered in solidarity with the US.