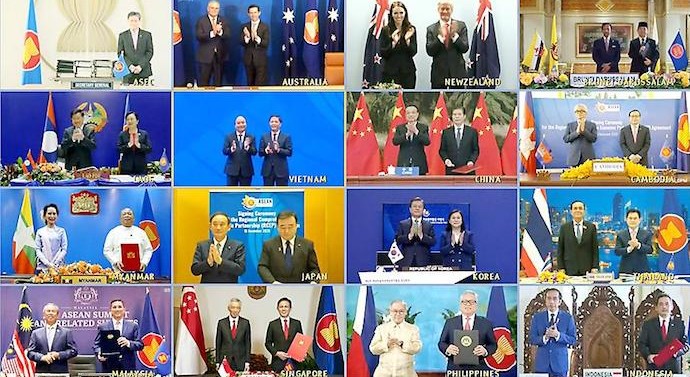 The Regional Comprehensive Economic Partnership (RCEP) was signed over a video link after eight years of negotiations as the world’s economy is struggling to survive the threats posed by COVID. The deal was inked by prime ministers and their trade ministers at a virtual conference

‘Under the current global circumstances, the fact the RCEP has been signed after eight years of negotiations brings a ray of light and hope amid the clouds,’ said Chinese Premier Li Keqiang after the virtual signing.

Prime Minister Jacinda Ardern believes that “New Zealand industries will directly benefit from this new agreement, helping us to accelerate our economic recovery and build back better.”

Singapore’s Prime Minister Lee Hsien Loong described the signing of the pact as a “major step forward for the world, at a time when multilateralism is losing ground, and global growth is slowing”. The trade deal, he said, would help “promote freer trade and closer interdependence especially in the face of COVID-19” when the economies of all countries are under pressures.

The trade deal is seen as a China-led alternative to a now-defunct Washington trade initiative, Trans-Pacific Partnership (TPP).

The RCEP ‘solidifies China’s broader regional geopolitical ambitions around the Belt and Road Initiative (BRI)’, according to said Alexander Capri, a trade expert at the National University of Singapore Business School.