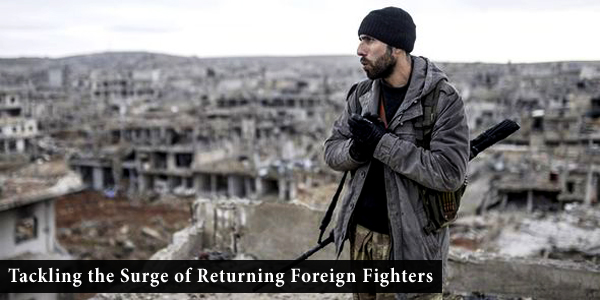 Over the past year, the fortunes of so-called Islamic State (or Daesh, al-Dawla al-Islamiyya fil Iraq wa al-Sham) have turned in Syria and Iraq. As the Caliphate has begun to contract, the seemingly intractable flow of foreign fighters has started to slow, down from a high of 2000 a month crossing the border from Turkey to around 50 by September 2016. With the noose tightening around Daesh strongholds in Mosul and Raqqa, the tide has begun to reverse and the steady trickle of returnees is beginning to pick up pace. An estimated 15,000 foreign fighters were still in the conflict zone at the end of 2016, so policy makers have been warning of a potential surge in returnees. Until recently, the focus has primarily been on preventing the travel of potential foreign fighters; now it will have to extend to addressing their return.


“Hard” or “soft” approaches?
Returnees are often perceived as a threat for two reasons: first, their enhanced capability of carrying out attacks, resulting from battlefield experience and network connections; second, their presumed motivation to do so, as many are thought to have been desensitised towards violence and brainwashed by the organisations they join. While some studies have found that most returnees do not present an acute danger (only 1 in 360 foreign fighters perpetrated an attack after they return), other evidence suggests that a substantial number of returnees stay active members in extremists networks at home.

Reflecting public threat perceptions, “hard approaches” towards foreign fighter returnees remain popular: These include various administrative measures, such as revoking citizenship and issuing entry bans to keep foreign fighters from returning home. Within the criminal justice sector, prosecution and long prison sentences are favoured approaches. However, while the application of administrative measures differs between national contexts,, many countries have reported that prosecution of foreign fighters remains difficult. Returnees often do not meet the required evidentiary threshold, or can only be prosecuted for relatively minor offenses, and prison sentences, if imposed at all, are relatively short. An added complication in relying first and foremost on the criminal justice sector to solve the problem is the still unclear relationship between imprisonment and radicalisation, with anecdotal evidence suggesting that multiple perpetrators of jihadist attacks adopted their radical beliefs in prisons.

Since countering the threat of foreign fighter returnees through criminal prosecution alone has proven difficult, policy makers are increasingly acknowledging the importance of a “soft approach”. Such approaches emphasise a range of policies that fall under the broad term of countering violent extremism (CVE), such as rehabilitation and prevention measures. This is helpful because it recognises that not all returnees are the same – they are a heterogeneous group that includes those willing to commit attacks, those disillusioned with life under Daesh, and even those who could be seen as ‘victims’ of terrorist recruitment, such as children and family members of foreign fighters.

Differentiating between these groups of individuals in rehabilitation and prevention brings many benefits. It provides a pragmatic alternative to deal with individuals who cannot be successfully prosecuted (or do not fall under the criminal justice sector in the first place) but who might still be considered vulnerable to radical ideologies in one way or another. Similarly, rehabilitation-geared approaches to countering the threat of returnees can be sufficiently flexible to allow for a personality-specific treatment of these offenders, and therefore also help to focus resources on where they are needed most. Last but not least, rehabilitated foreign fighters can provide a valuable resource for prevention efforts by providing a credible voice in countering extremist narratives.

As recent work by the Global Counter-Terrorism Forum has highlighted, to be effective, it is crucial to pursue policies that cover the entire life cycle of radicalisation to violence. While rehabilitation is essential to address the problem of returnees, it is equally important to prevent the radicalisation of vulnerable individuals in the first place, counteracting the influence of larger extremist networks in recruiting new followers. So states need to invest in both. Prevention and rehabilitation
Many governments recognise the importance of CVE work to complement criminal justice and security measures in their counter-terrorism efforts. But strategies and programmes vary and systematic evaluation of policies in the field is still not commonplace.

At a recent conference for counter-terrorism organised by the Organization for Security and Co-operation in Europe, discussion on good practices in CVE resulted in a comprehensive list. Programmes should be both country- and personality-specific, focus on the local level and incorporate credible civil society actors, while emphasising the role of youth and women. Furthermore, they should involve multiple stakeholders – ideally a whole-of-society approach – and be based on evidence of what already works well.

How does this work in practice?

A common factor in many prevention and rehabilitation strategies is indeed their multi-stakeholder character. However, the way the parties involved cooperate can look different from country to country. Broadly speaking, programmes can be found on either end of the centralised-decentralised spectrum, or anywhere in between.

We find an example of decentralised CVE policies in Germany. The government supports numerous local and regional non-governmental organisations which carry out prevention and rehabilitation initiatives across the country, while limiting itself to a steering role by providing funding.

On the other side of the spectrum is France. There, the government relies on its system of prefects – representatives of the state in its regions and departments – to decide on a course of action for extremists and identify the stakeholders involved in the deradicalisation process.

Both approaches have benefits and drawbacks. Whereas the German bottom-up approach empowers local actors, who are well positioned to win the trust of affected individuals and communities, the French top-down method can ensure that all relevant stakeholders are involved when needed. On the down side, German CVE initiatives remain heterogeneous and piecemeal in the absence of a comprehensive involvement of federal authorities. And the fact that France’s CVE programme is run by the Ministry of Interior, which is also in charge of the National Police, may cause reluctance among families to report cases of radicalisation for fear of legal consequences.

Other states have chosen approaches in between those two extremes. The Danish approach – known internationally as the “Aarhus model” – seeks to counter radicalisation through a firmly institutionalised cooperation. Initially, these networks involved schools, social services and police but since then psychiatric, healthcare, prison and probation services have joined. This institutionalised collaboration exists in every Danish municipality and is part and parcel of established governance structures (government ministries also have a role in steering the collaboration). Yet, at the same time, it is sufficiently localised to be accessible to affected individuals and communities as well as civil society partners.

Beyond their organisational structure, prevention and rehabilitation programmes also vary with regard to their objectives. Some put most emphasis on disengagement, that is, on bringing an end to individuals’ violent behavior; others take a deradicalisation approach and aim at changing radical beliefs; and again others combine both objectives.

An example of a deradicalisation approach is given by France’s state-run centres for “Prevention, Integration and Citizenship”, providing radicalised (but not convicted) individuals with lessons in French history, religion and philosophy with the aim of instilling democratic and humanitarian values. The first such centre opened in September 2016 and is intended to host some 25 participants. However, since February 2017, it stands empty after all of its nine former occupants left, either voluntarily or due to criminal convictions, without having completed the centre’s curriculum. The programme was heavily criticised by a parliamentary report in early 2017 for failing to select the right individuals for participation, while costing taxpayers €2.5 million a year.

More often, countries are focusing on disengagement next to deradicalisation. Participants in such programmes, whether returnees or radicalised individuals who did not travel to conflict theaters in the first place, are supported with practical help in finding, for instance, a job or an apartment. In Denmark, for instance, an exit program for foreign fighters within the Aarhus model framework offers returnees varying degrees of help with regard to employment and education, housing, psychological counseling and medical care. Next to receiving these types of practical help, the programme provides participants with a deradicalisation mentor, to whom they can turn for both day-to-day help and religious debate.

The bottom line
Returning foreign fighters clearly present the next major challenge to policy makers in tackling the ever-evolving foreign fighter phenomenon. There will be much clamour from some quarters for a “hard approach” of prosecution and long prison sentences. But it should be clear that this will fail to address the entirety of the problem and that criminal justice measures need to be augmented by prevention and rehabilitation policies.

However, much still needs to be done to evaluate best practice in these programmes. This cursory overview of prevention and rehabilitation in various countries in the European Union suggests that programmes work well when they are adapted to a country’s institutional culture and, particularly, when that culture favors collaboration between different stakeholders. Likewise, a focus on providing radicalised individuals with pragmatic help in rebuilding their lives seems essential in countering their return to violent extremism – perhaps more so than focusing on turning them away from radical ideology alone.

With many countries taking different approaches, it is crucial that proper evaluations are built into these programmes and that their outcomes are widely discussed, so that everyone can benefit from the lessons learned and avoid repeating past mistakes.