Why insecurity and uncertainty will haunt Iraq for years to come 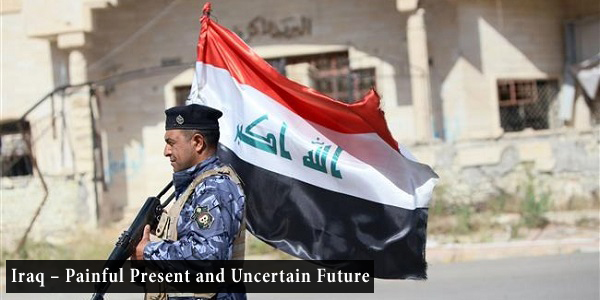 Since the expulsion of Saddam regime in 2003, Iraq has been under serious and repeated threats and a battleground for rival superpowers, regional states, political elements and dissimilar militants groups.

After U.S. invasion of Iraq in mid-2003, the Iranian Government and Kurdish elements benefited the most from the downfall of Saddam and strengthen their foothold and influence in most parts of Iraq.

Once Saddam Hussain was arrested and his sons killed by the U.S and NATO forces, the Iranians managed to fill the power vacuum by aligning itself with Iraqi Shia community and isolating the traditionally Sunni rulers.

The United States had assumed that after isolating the hardcore Sunni-backed Saddam Hussain lobby from Iraq it would be in a better position to control not only Iraq but also the region as a whole.

To the surprise of the United States, the Iranians took better advantage of the situation and quickly filled in the gap created by the dismissal of Saddam Hussain and his Sunni regime.

To keep Iranian under radar and limits, the Western nations kept Iran under sanctions or “control” to not allow it to cross the “red-line” in Iraq.

Nevertheless the Iranians smartly used “anti-Saddam sentiments among Shiite and Kurds in Iraq and managed to infiltrate thousands of volunteers and Revolutionary Guards into Iraq in order to turn the table against traditional Sunni-Arab regimes which had backed Saddam Hussain.

The Sunni-Arab states worried about their own future as they mildly criticized the heavy use of ground and air power by the U.S. and its allies against Sunni hardliners, but also quietly withdrew from Iraq and had no options than to back the U.S. strategic goals in Iraq.

Middle East experts in Pakistan believe that the brutal use of force, carpet bombings and humiliating defeat of Iraq’s Sunni-dominated armed forces by the U.S. and NATO forces coupled with inhuman torture and humiliations such as in Abu Gharib Prison had left no option for the hardcore and powerless Sunni radicals than to join a more ruthless and cruel force like ISIS in Iraq. This is why, experts think that the making of Islamic State in Iraq and Syria (ISIS) had little to do with Islam or Muslims but a mixture of humiliating defeat, failures and threat of elimination from the scene.

During early days of the invasion of Iraq, the Pentagon planners were convinced that by playing “Shia-Sunni cards” against each other the U.S. would be able to attain its own “long-term objectives” in the Middle East. However, within months, U.S. realized that while under-pressures the Sunni populations and regional states failed to play their due role in Iraq, Iranians successfully managed to infiltrate deeply and finally turned the table against the rivals.

During the initial period of invasion of Iraq, the Iranians asked its supporters and sleeper cells to cooperate with the U.S. to first crush the Sunni establishment that had crushed the Shiite and Kurdish communities for years.

With Iranian support and United States’ tacit approval, the Shiite leadership gained effective control of Iraq by 2010 and installed a Shiite-controlled government headed by Nouri al-Maliki. But as soon as the U.S. agreed to withdraw from Iraq, the Sunni forces of Iraq quickly came out of their hideouts and gained the help and support from neighboring states. Sunni financers and religious scholars-turn-sympathizers decided to counter the Shia-domination of Iraq in the traditionally Sunni-dominated region.

By this time, Arab Spring had engulfed the region, distressing several Middle Eastern states including Egypt, Algeria, Tunisia, Libya and Morocco. While, Shiite communities in Bahrain and Saudi Arabia started their own uprising apparently with encouragement from Iran-backed Shiite entities as the Sunnis began their own comeback struggle in Iraq.

The Syria’s Bashar al Assad’s Shia-minority regime, fearing a backlash by Sunni-regimes due to its close and strategic links with Iran, drew further close to Tehran to consolidate his government. Assad’s intention sparked off another reaction from Sunni states including Saudi Arabia, Qatar and Turkey all of whom considered it as a new Iranian move to expand its Shiite influence from Iraq to Syria.

Turkey, Qatar and Saudi Arabia joined hands to support the Islamic and Sunni militant groups in Iraq and Syria to help them rise against Shiite-led establishments. The ongoing political chaos in Iraq, failure of politicians to unite on a single agenda of rebuilding the nations after destruction paved the way for ISIS and other militant organizations in Iraq and Syria.

Initially several Western states including Israel, Britain, France, Canada and the United States backed the revival movement of Sunni powers apparently to fill the power vacuum created in Iraq but later they realized that yet another monster was ready to take over in the form of ISIS (Islamic State of Iraq and Syria).

By early 2013, Daesh had established itself in the region, triggering a new and different concern and fear among the neighboring states.

It was during 2013 when Saudi Arabia and Turkey began penetrating into Iraq and stepped up their support against Iran-backed Shiite militia and other militant groups in Iraq.

The radical and extremist Sunni elements in Jordan, Egypt, Saudi Arabia and Gulf states had already been frustrated at slow or no move by Sunni Arab states and expressed anger over no-action despite humiliating defeat of Sunnis and escalating Iranian influence in Iraq, Syria and Lebanon. Around one thousand Sunni militants had moved into Iraq during 2013 and 2014 alone while hundreds of Sunni militants volunteered to join the suicide squads aimed at destruction of Shiite power bases.

Experts have noted that all and any attempt by any government to interfere in Iraq aggravates internal tension and generate fresh mistrust among Iraqi political parties and rival armed groups.

Abu Musab al-Zarqawi was later killed on June 7, 2006 when a U.S. F-16 fighter jet bombed a house where he was hiding.