India started development of its nuclear power for civilian use immediately after its independence in 1947, but the nuclear test conducted by China in 1964 is consider to be a major factor in motivating India to conduct nuclear test of its own. With India’s defeat in a border clash with China in 1962, Indian politician strongly insisted that India should carry its own nuclear tests to counter their adversary China. Ten years after Chinese nuclear test, India conducted its first nuclear test in Pokhran test range, in May 1974. On the other hand, India's archrival Pakistan's nuclear energy programme was established and started in 1956 following the establishment of Pakistan Atomic Energy Commission. After the 1965 India-Pakistan war, Pakistani foreign minister Zulfikar Ali Bhutto aggressively began the advocating the option of “nuclear weapons programme”. During the India-Pakistan War of 1965 Zulfikar Ali Bhutto announced: "If India builds the bomb, we will eat grass and leaves for a thousand years, even go hungry, but we will get one of our own. The Christians have the bomb, the Jews have the bomb and now the Hindus have the bomb. Why not the Muslims too have the bomb?"

In 1971 Indo-Pakistan war, Pakistan was defeated and divided into two states, furthermore, Pakistan's key allies, the U.S. and China also failed to provide any significant assistance to Pakistan. Pakistan was internationally isolated and realized that it could rely on no one but itself. Hence in the year 1972, Pakistan started to develop nuclear weapons of its own. The nuclearization of India in 1974 accelerated the nuclear development in Pakistan. India conducted its second nuclear tests in May 1998, and in response to the Indian underground nuclear tests, Pakistan conducted its first nuclear tests on May 28 and 30, 1998. In comparison to population, India is more powerful than Pakistan by almost every metric of military, economic, and political power. Thus the sense of insecurity felt by Pakistan after the breakup of military balance in the area led the Pakistanis to consider non-conventional form of security. 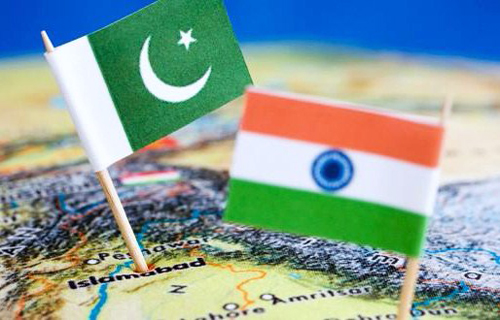 India-Pakistan Non-Nuclear Aggression Agreement
On December 31, 1988, the Prime Minister of Islamic Republic of Pakistan and Benazir Bhutto and the Prime Minister of the Republic of India Rajiv Gandhi, in order to reaffirm their commitment to durable peace and the development of cordial bilateral relations signed “The Prohibition of Attack against Nuclear Installations and Facilities”, also known as India-Pakistan Non-Nuclear Aggression Agreement.

The treaty was entered into force on 1 January 1991, and since January 1992, both India and Pakistan has exchanged 22 lists of their respective civilian nuclear-related facilities. However, each side often question about the completeness of the other's list.

The agreement provides for refraining from undertaking, encouraging, or participating in, directly or indirectly, any action aimed at causing destruction or damage to any nuclear installation or facility in each country. The term nuclear installation or facilities against which attack is prohibited is defined as "nuclear power and research reactors, fuel fabrication, uranium enrichment, isotopes separation and reprocessing facilities as well as any other installations with fresh or irradiated nuclear fuel and materials in any form and establishments storing significant quantities of radioactive materials."

In accordance with Article-II of the Agreement on prohibition of attacks against nuclear installations and facilities, both parties are required to exchange the list of the latitude and longitude of their nuclear installations or facilities and shall inform the other whenever there is any change in location, on 1st January of each year. The both neighbors and arch-rivals routinely test nuclear-capable missiles and generally notify each other about test dates.

Pakistan and India have fought three major wars since they gained their independence from Britain in 1947. There have been severe and adverse economic effects in India and Pakistan due to arms-race between the both countries. Increased spending of budget in defense also effected human development, education, healthcare and other social sectors in the region.

The landmark treaty of “India-Pakistan Non-Nuclear Aggression Agreement” was the crucial step towards bringing the two nuclear-capable nations into close working relationship. A stable deterrent relationship between Pakistan and India would not only bring peace and security to the both countries, but would also bring stability to the whole region. However, both parties need to add the compliance measurements in this agreement and can further pave the way for total nuclear disarmament and nuclear free zone for South Asia.