After the 9/11, the United Stated foreign policy shifted towards the middle-east. In order to tackle the terrorism problem in the region, the U.S. initiated its’ war on terrorism in Afghanistan and Iraq. These wars led the migration of militants and high-level Al-Qaeda leaders into the countries like Pakistan and Yemen. Afterward, the Bush administration began a campaign of ‘targeted killing’ against suspected members of Al Qaeda and other armed groups.(1) Consequently, drones have become a critical tool in the war against terrorist and militant organizations worldwide. Their advantages over other weapons and intelligence systems are well known. They can silently observe an individual, group, or location for hours on end, but take immediate action should a strike opportunity become available—all without putting a pilot at risk. This combination of capabilities has allowed the United States to decimate the leadership of al-Qaeda in Afghanistan and disrupt the activities of many other militant groups.(2)

The CIA allegedly carried out its first targeted drone killing in February 2002 in Afghanistan. Six months later, the U.S. took these same initiatives in Yemen. After that, the U.S. started their full-scale program of targeted killing by drone in Pakistan. After the US invasion of Afghanistan, a number of Taliban fighters fled across the border into Pakistan and in particular FATA region, which borders Afghanistan. 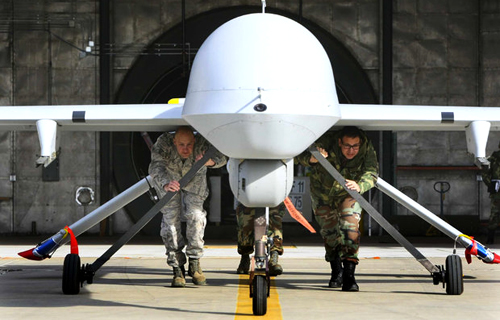 Since then, the U.S. has consistently been waging its drone war in the tribal areas of Pakistan, employing the argument that Al-Qaeda and associates, having taken refuge in Pakistani tribal areas, pose a threat to American lives; hence it is justified to attack them. The argument suggests that Pakistan was either unwilling or incapable of fighting violent extremists. The fact of the matter is that at least 42,000 Pakistani lives, including more than 5,000 of soldiers and policemen, have perished in fighting violent extremists.

When President Bush left office in January 2009, the US had carried out at least 45 drone strikes according to the New America Foundation, or 52 according to The Bureau of Investigative Journalism, inside Pakistan.(3) Since then, President Obama has reportedly carried out more than five times the number than in previous administration. This dramatic escalation in the US use of drones to carry out targeted killings has brought with it escalating tensions between the US and Pakistan, as well as continued questions about the efficacy and accuracy of such strikes.

Analysis:
According to the United States legal defense of drone use, under condition of armed conflict or self-defense, the drone use does not require a legal process, and the domestic law does not consider such targeting as unlawful.(4)

However, the militant extremists are not just a group of people without cause. To a certain extent, the extremism or radicalism is a mindset and a set of ideas, and drone attacks do not kill their ideas. Rather drones strengthen the voices of militant extremists who condemn foreign invasion and demand local control over their region. Drones bring legitimacy, credibility and sway public opinion toward the militant’s arguments. Even if the drones kill militant extremists, it makes their ideas more powerful. So, the U.S. policy-makers - instead relying on the short-term tactics of drone strikes - should work on the development of a comprehensive strategy to address the root causes driving militancy.

According to the Bureau of Investigative Journalism, From June 2004 through mid-September 2012, drone strikes have killed 474-881 civilians, including 176 children in Pakistan. And thus, drones commit humanitarian crises, violation of human rights and seeding long-term instability in the region. Such strikes fuel anger in the affected areas and generate sympathy for the extremists, making it much harder to defeat the militancy. It also breeds a counterproductive desire for revenge among Pakistanis who might otherwise harbor no hostilities toward the United States. 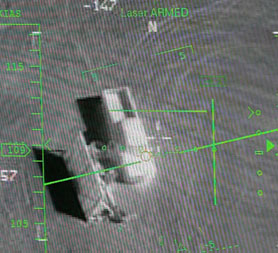 The United States should also take into consideration the rising concerns in international community regarding the efficacy and counter-productive nature of drone strikes. Majority population of the countries ranging from regional powers China, Russia, Brazil, Japan, to European countries, such as France, Germany, Greece, Spain, Italy, to Middle-Eastern countries, like Turkey, Egypt, Tunisia and Lebanon, oppose the drone strikes conducted by the United States to target extremists in Pakistan, Yemen and Somalia. As the number high-level targets killed as a percentage of total casualties are extremely low, which is estimated at just 2%. This means that 50 civilians are killed for every 1 “suspected terrorist”. U.S. officials who acknowledge drone related civilian deaths claim, “sometimes you have to take a life to save lives.” Yet there is not credible evidence that lives are being saved by drone attacks. And it is widely believed that, the drone strikes have not reduced militancy; in fact have been a major stimulant to terrorism.

Option 1: The United States should cooperate with the local governments, for e.g. enhance its' bilateral cooperation with Pakistan, and should urge Pakistan to play a more positive and decisive role in tackling the militancy issue.

If we consider the cost and benefits of the above given options, in option 1, there are mainly two state actors involved, USA and Pakistan. Both the U.S. and Pakistan shares a common goal of eradicate the militants and reduce the radicalization from the region. And without the support of each-other both the U.S. and Pakistan cannot achieve complete success in eradicating the terrorists. But on the other hand, both the countries have a very different approach towards solving this problem. As we can see from the past experience, both the U.S. and Pakistan had complex relations, and both sides blame each other for being failed to restrain militants and stimulating the radicalization. USA blame Pakistan for being unable or unwilling to exterminate the terrorists from its land, where as Pakistan hold the United States responsible for involving in its’ internal affairs and using drones in its’ territory, which stimulates radicalization and create anti-American sentiments in Pakistan. 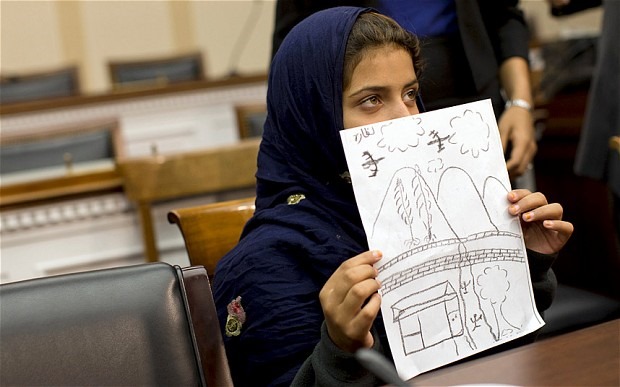 Option 2: Limit the role of drones, try to stop the indiscriminate killings, and should initiate the peace talks with the local tribal leaders, in order to bring an end to the extremists, whose radical mindsets are in fact bring the destruction of the whole society.

Drones strikes are fueling anti-American militancy and turning locals toward Al-Qaeda and away from the United States. Tribal groups targeted by drones have legitimate grievances against their governments. So, a robust diplomatic engagement at all levels to address legitimate grievances and make better strategy would draw tribal groups toward cooperation by fostering reconciliation and dialogue to address underlying grievances.


Option 3: The U.S. should fulfill its international humanitarian and human rights law obligations with respect to accountability and transparency, and ensure proper democratic debate about key policies regarding drones.

The US should fulfill its international humanitarian and human rights law obligations with respect to the use of force, including by not using lethal force against individuals who are not members of armed groups with whom the US is in an armed conflict, or otherwise against individuals not posing an imminent threat to life. But, as these drone strikes are operated by Central Intelligence Agency, thus it is quite difficult to provide complete transparency.

Recommendation:
The first two policy options are the matter of international politics and foreign affairs. On the other hand, the third policy option is more an issue of domestic politics.

The U.S. should consider option 2: “Limit the role of drones, try to stop the indiscriminate killings, and should initiate the peace talks with the local tribal leaders, in order to bring an end to the extremists, whose radical mindsets are in fact bring the destruction of the whole society.”

It is the most essential priority for the U.S. to stop indiscriminate killings and limit the role of drones. As more and more civilians are getting injured and losing their lives from U.S.-led drone strikes it is becoming ineffective for the U.S. to continue its war on terrorism and to legitimate its actions. As United States is the major propagator of international peace and human rights, thus it is the foremost responsibility to differentiate between the terrorists and innocent civilians. The U.S. should try to solve this issue through peaceful dialogues with the local tribal leaders, and bring the militants into the table for talks. While make joint efforts to develop not only their society but also their mindset, which will eventually bring an end to extremism.